Tales from Vietnam. Cycling over Mountains and in the Dark

The following is a flashback from my time cycling in Vietnam. It recounts the time I was nearly stranded on top of a unpopulated mountain at dusk with no tent, no water, no warm clothes, little food, no sleeping bag, and no flashlight. 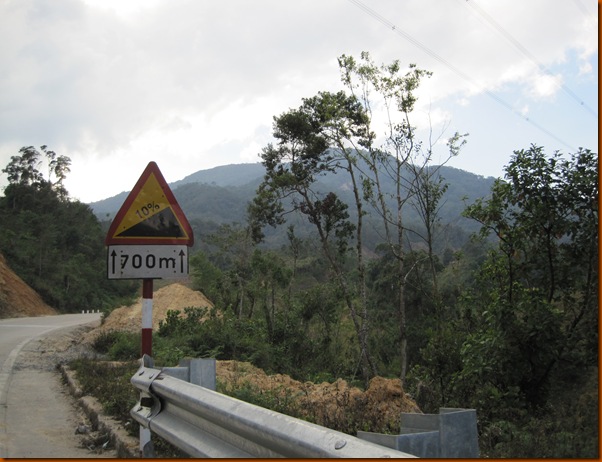 So I pressed on, thinking, if necessary, I could flag down a bus. Almost immediately the road began to climb. And climb. I optimistically expected the road to reach the peak around every corner. No such luck. I don't know if there is any way to impart the experience that afternoon. The uphill seemed endless, and in fact, it continued uphill, often steeply, for 20 km and those 20 km took me at least 4 hours to complete. When the grade was too steep (it was quite often 10%) or when my legs were simply jello-like and sore, I got off and pushed the bike until my arms were jello-like and sore; then I either took a break or switched again to riding. 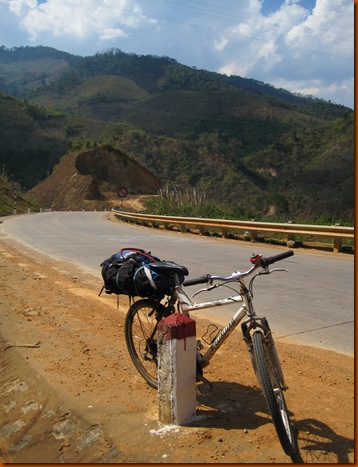 It was the hottest part of the day and the sun was merciless. I can say, on the bright side, that the scenery—the surrounding mountain view—was stunning. Cliché! My breath was taken away from the climb and then again from the view! ;)

Despite the view, though, I was exhausted and when I looked at my cell phone to check the time after noticing the air around me was chill, I saw it was getting on to 3:30 p.m. and the mountain, the uphill, had no end in sight. "Give it some time," I thought. "I can always flag down a bus in a half hour or so."

So I continued up and up and up. Soon it was 4:20 p.m. and the road ahead had a sign declaring a 10% uphill grade. So I flagged down a bus that was going to Da Nang. But they wanted 20,000 VND which struck me and still strikes me as exorbitant. So I waved goodbye to them, wondering if I'd regret it later. (Spoiler alert: The answer is yes. And no.)

So I continued on—nothing to do but move forward. And lo! What's this? A downhill! Yes!

I cruised down the hill, thinking, "This is it! The crest of the mountain." Exuberantly, I used my newly defined phrase: "It's all downhill from here!" 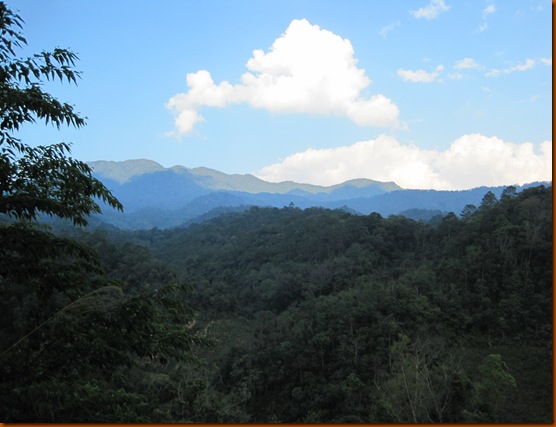 I passed through a tiny village and three boys lined up and held out their hands to high five me as I rode by. I felt joyous, unconquerable. I passed two policemen; they tried to say something to me. Wary, I smiled and waved and kept going. I passed a waterfall, right in the nook, the armpit of the road's curve.

And then I turned the corner. "Motherfucker!" I thought, along with other obscenities. Another uphill sign! 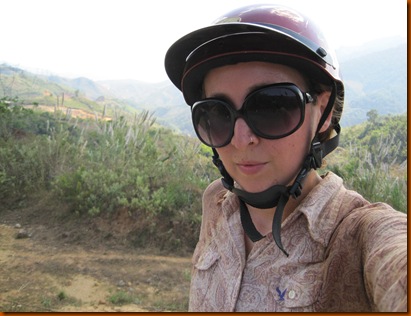 This sign indicated only 150 m, but I knew all too well that those 150 m could drag on for kilometers. I felt completely dejected. I ate a tangerine. Now I had no water and only two tangerines. It was late, past the time when most minibuses ran and it was cold. I waited, hoping to flag down a minibus, but none passed. I had no tent, no sleeping bag, no sweater, no flashlight, no water. The situation was feeling a wee bit desperate.

I gave myself until the end of the tangerine, then when no minibus had passed or could be seen approaching, I had nothing left to do but keep moving. The white and red stone kilometer markers on the side of the road indicated a town 9 km away. Even if it was uphill the whole way, surely I could make it around dusk and find a home to sleep in! So I trudged up the hill. And it was, blessedly, the last! 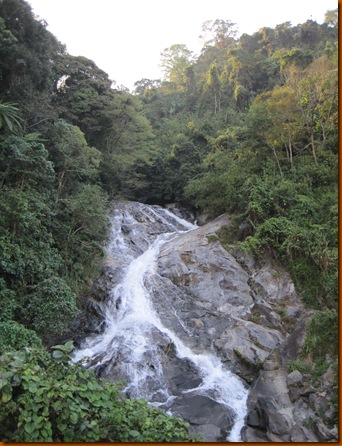 It really was downhill from that point on, which was lucky because I soon found out that the "town" the kilometer markers were counting down to was not a town at all. It was a waterfall.

So I kept going. The going was easy now—all downhill. Not to mention, there was absurdly beautiful scenery at every turn. It seemed once I had reached the crest of the mountain, the climate suddenly and very noticeably changed. On the way up, the mountains had been arid, often with exposed patches of red dirt and patches of dry, brownish grass. Once on the other side of the pass, the air became absurdly thick with moisture. Every breath I took was like drowning in warm water and the mountains had no dry patches, no exposed dirt. Instead they were filled to bursting with ferns and palms and vines and greenery of every sort. I could hardly believe the lushness. At every turn there was a waterfall.

I stopped often to take pictures but soon realized I had no time to dawdle. I saw a kilometer marker for Kham Duc—my original destination—for about 25 km away. It was already dusk, but I was making great downhill time, so I decided I would try to make it. I might have to cycle a bit in the dark, but so what?

So I pushed on, as fast as my legs and the hill would take me. And the kilometers quickly ticked by. It was just that time of evening when the bugs are out in full force. This fact, coupled with the extreme humidity, soon meant my face was speckled with little black bugs.

With 10 km to go, darkness fell completely. I cycled on, using the weak flashlight mode on my cell phone and holding the phone in my left hand so I could try to make out the road in front of me. The traffic was not too thick, but I still feared some crazy driver (of which there were plenty) would swerve into me in an inattentive moment. But luck was on my side and a little after 8:00 p.m. I finally made it into Kham Duc and though I entered the town slowly and with little fanfare, I felt as if I were in a one-woman parade. I felt like celebrating.

Posted by bliss vagabond at 3:46 AM