Falafels of Beirut. A Love Story

On my first night in Beirut my host told me of the best falafel in Beirut—a falafel from a restaurant so historic, so popular, so delicious that Charbel could barely form sentences as he talked about it. He was near-speechless and suddenly possessed of a strong craving. Needless to say, I could hardly wait until the next day to eat this famous falafel. 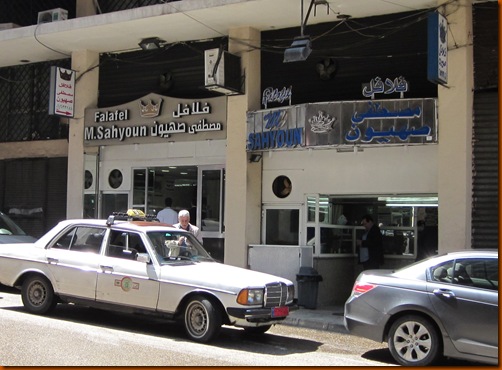 Apparently, the original shop, Sahyoun, was owned by a man with two sons. It was widely known that he made the best falafel, but when he died there was a bit of a falling out and so the two sons opened two falafel shops, side-by-side, both continuing to use the same name, Sahyoun. The story had me hooked, so on my first full day in Beirut, Charbel and I walked to Sahyoun for lunch and there I got to see the shop in action.

Sahyoun is a well-oiled (excuse the pun) falafel-making machine. There is always one man working the fryer, using a special falafel scoop which has a quick-release lever and forms perfect falafels every time. Meanwhile, a separate employee works the cash register, taking your order when you arrive. A third worker prepares and assembles each sandwich, slicing radishes and tomatoes in quick and even strokes. I was awed by their efficiency and by the number of customers I saw duck in and out in only a few minutes’ time. Charbel was clearly not the only person who thought Sahyoun has the best falafel in Beirut. 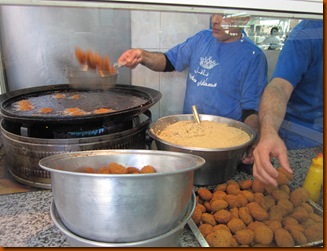 I found the falafels to be a bit different from what I’m used to. They were pure, simple, understated. No specks of green, no herbs, lightly spiced. Perfection. Instead of the falafel being the main source of flavor, it was the components of the sandwich which combined to create a wonderful, tasty whole.

Each sandwich had a layer of roughly chopped parsley and mint, sliced radishes and tomatoes. All these veggies were then topped with three smushed falafels, a drizzling of optional spicy pepper sauce, and a liberal dousing of tarator (tahini, lemon juice, garlic) sauce. The sandwich is traditionally eaten with a few pickled spicy green peppers. 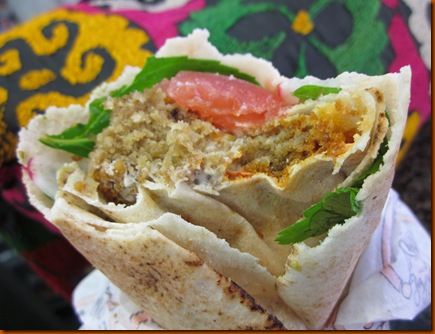 After trying the shop on the right, I went back the next day to try the other brother’s falafel. I would love to say that there was an obvious answer to the question: Which is better? But the only difference I could distinguish was in price. The shop on the right charged 3,000 LL while the shop on the left only 2,500 LL (about $1.70). Other than that, both sandwiches appeared and tasted identical—perfect. 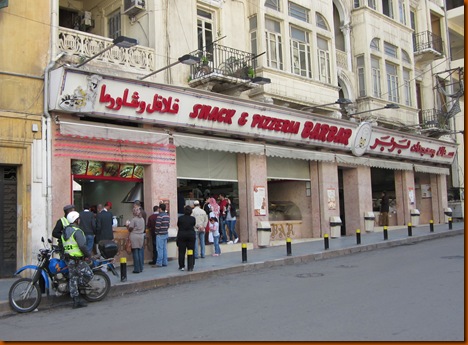 Having tried the best, I decided it was time to try the rest. I continued my falafel quest at Barbar, a popular fast food restaurant with two branches in Beirut. Barbar has all the favorite Lebanese snack foods, including fatayer (a calzone-like bread stuffed with spinach), manoosh (flatbread with any number of toppings, my favorite of which is zaatar), schwarma, mezzes (including tabbouleh, stuffed grape leaves, and fattoush), and falafel. 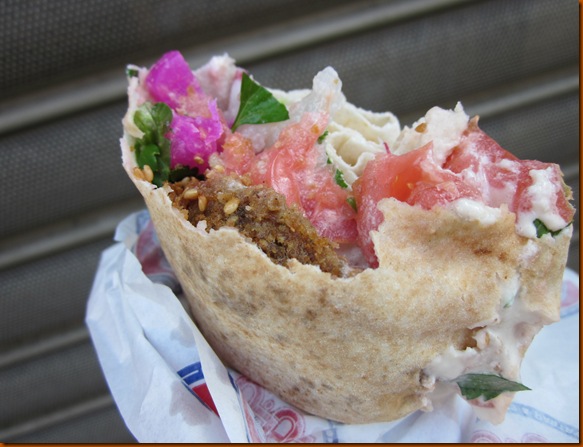 Barbar’s falafel differed from Sahyoun’s in a few ways. The first and most obvious was the falafel itself. Barbar coated each falafel in sesame seeds before frying—a delicious touch I approved of. Unfortunately, the sandwich itself was inferior. The tarator sauce was not evenly distributed, resulting in an overly dry wrap. And though it’s traditional, I found I’m not a big fan of the pink pickled turnips that Barbar includes in their falafel sandwich. 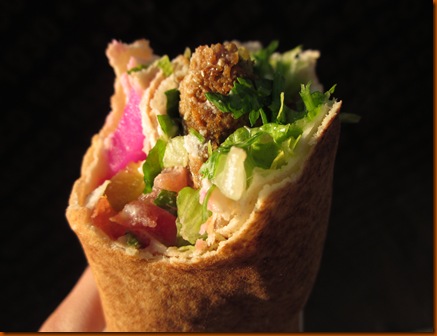 another day, I tried a falafel from a nameless shop near Hamra and the American University of Beirut. This wrap was big and each falafel was speckled with parsley and more heavily spiced than usual—a change which I enjoyed. However, like at Barbar, I found the tarator sauce applied too lightly, resulting in a very dry and inferior sandwich.

What I discovered on my falafel tour of Beirut is that, as with orgasms, there’s no such thing as a bad falafel. But given a choice, I know where my next falafel in Beirut is coming from.

Posted by bliss vagabond at 9:13 PM