My Imminent Engagement and Turkish Connection 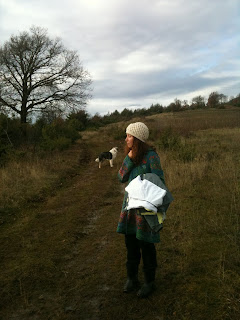 A common language is magic. It opens up worlds that were previously inaccessible, landscapes that were previously unseen.
My Turkish has served me well. Though I've forgotten a lot of vocabulary and grammar since I lived in Istanbul in mid-2009, I've had the opportunity to use and practice my Turkish all over the world.
At the Halal Indian restaurant in Phnom Penh, I heard Turkish being spoken and invited myself to join the speakers, two men who worked at the Zaman language school. They offered me a chance to practice speaking Turkish as well as a job at Zaman. I appreciated both offers, but only took them up on the latter.
While hitchhiking in Hungary, I began to notice that several of the kamyons had Turkish license plates and while I didn't target them specifically, I sent out a silent request, and sure enough, a Turkish driver pulled over for me. Our common language was Turkish, and through it I was able to communicate basics about myself--where I was going, where I had been--and learn about him and his family in return. He bought me çay and offered me lunch, explaining that while I was in his truck, I was his guest. As we were parting, he pressed a 20 Euro note into my hand, and though I repeatedly refused, telling him thank you but I couldn't accept it, he insisted. I walked away with tears in my eyes. 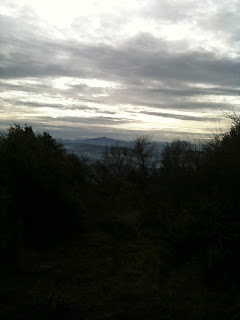 How excited I was, after ten months in southeast Asia, to hear Turkish in the markets in Skopje, Macedonia. When I asked, "Türkçe biliyor musunuz?" and the market seller replied, "Tabii!" a giant grin spread across my face and I felt a sense of home.
Most recently, while staying in the small village of Krushevo in the southern mountains of Bulgaria, I have found and/or been found by the two Turkish speakers in a village of 250 inhabitants. The first, an elderly cross-eyed man, broke into a wide, gapped grin when I began speaking to him. And what a delight it was for me to finally be able to communicate first-hand with someone from the village! The man asked me if I was a maiden or if I was married, and upon hearing my answer, invited me to marry one of Krushevo's many bachelors and settle in the village. "We'll see," I responded. "Only Allah knows." 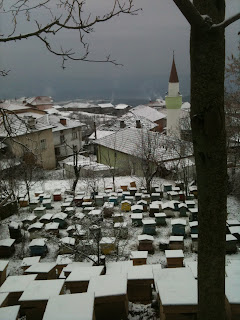 As if on cue, the next Turkish speaker I met was one of the afore-mentioned bachelors--a blond-haired, blue-eyed, high-cheekboned young man--who was training to become the village's next imam. We flirted very modestly while my friend Tracy looked at us and raised her eyebrows suggestively. He invited me to drink çay with him, "beraber" (together). We'll see. Only Allah knows.
Posted by bliss vagabond at 10:19 PM