In One Word: How to Spot a Pervert

It is amazing how much can be communicated through the subtleties of a language. To explain this, I'm going to need to delve a little bit into the structure of Turkish. Turkish has separate words for singular you (sen) and plural you (siz), but the plural you can also be used as a sign of respect and formality when speaking to one person. So when meeting someone for the first time, and especially when speaking to an elder, it is customary and natural to use the formal, plural you.

Now I have a tendency to waver back and forth between the yous, but when I'm hitchhiking I really try to address my driver with the formal “siz”. It's simply the polite thing to do. And what a difference that one little word can make. 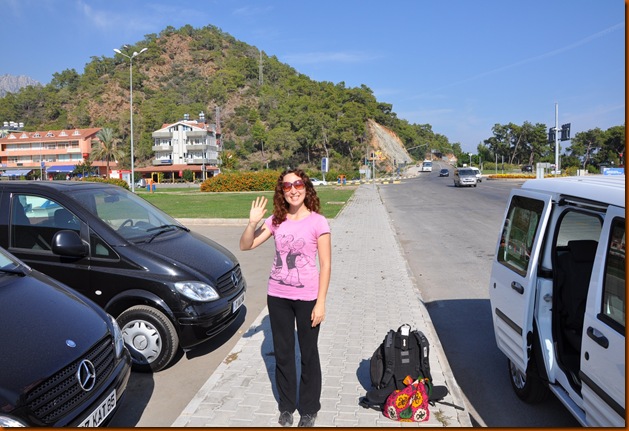 I walked with my little pack from the center of Kas to the main highway, the coastal road that runs from Antalya to Fethiye, crossed the road to head west toward Fethiye, placed my pack a few paces in front of me, and stuck out my thumb. Though it was a hot, sunny day, I was wearing my thick jeans. This was the advice of the Turkish father I stayed with in Kas, who vetoed my only other pair of pants as being too thin and therefore attracting too much negative attention.

Not much traffic today, I thought after one car passed me by. Despite the beautiful weather, winter is the low season in this part of Turkey. But the next car to turn onto the highway pulled over to the shoulder to pick me up. In a split second, I took in the details. Solitary young male. License plate started with 34, indicating the driver was from Istanbul. The car was sleek and black. Nice, but not flashy. I had a decent feeling about this, but it all depended on the driver. Even if he was harmless (no groping), there was still a chance he might make me uncomfortable (ask too personal questions, want me to be his girlfriend).

“Nereye gidiyorsunuz? Where are you going?” I asked him, using the formal ending to the verb.

“Mugla,” he replied. He could take me all the way to my destination: a few kilometers west of Fethiye. It remained to be seen whether this was lucky or not.

He spoke no English, so we conversed in Turkish. I began to get a bit weary when he asked me about traveling alone and spoke of his loneliness while traveling alone on business. Experience had taught me that the next topic of conversation would often be my marital status, followed closely by a request to exchange phone numbers and get to know each other better. But though we talked freely about work and travel and hobbies, he never veered into inappropriate territory; in fact, I suddenly noticed that even after 50 kilometers together, he was still using the formal you when he addressed me, asking “Isminiz ne? What is your name?” and Kac yasindayiz? How old are you?”

And true to form, he drove me kilometers out of his way to drop me at the very doorstep of my destination, the Pastoral Vadi Eco Farm in Yaniklar, Turkey, where a television crew awaited and filmed my arrival. But my appearance and interview (conducted and answered entirely in Turkish!) on national television is a subject for another post.

Posted by bliss vagabond at 1:52 AM