Beirut, like all great cities, cannot be easily reconciled. At times it appears homogenous, as if its disparate parts—languages, politics, religions—have been shaken so thoroughly that only one culture emerges. But look at the city in a different light, stoop down and look from a different angle and that one Lebanese culture appears fractured. 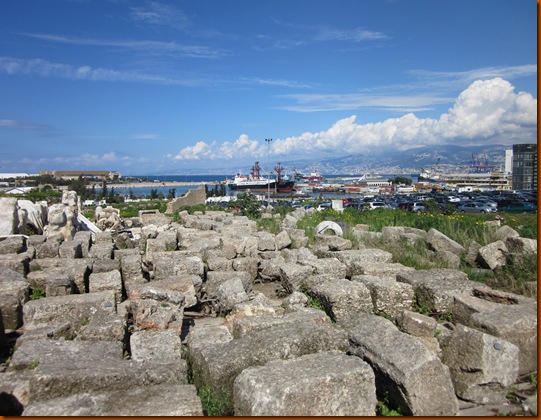 This becomes apparent to me as I walk from neighborhood to neighborhood, starting in the predominantly Christian sector of Achrafiye where sun-darkened mechanics mingle with unpretentious and cosmopolitan 20-somethings, where a swank restaurant lies next to a bare-bones tailor shop specializing in modest, matronly clothing. 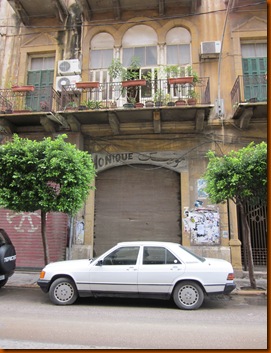 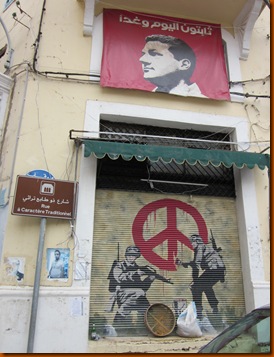 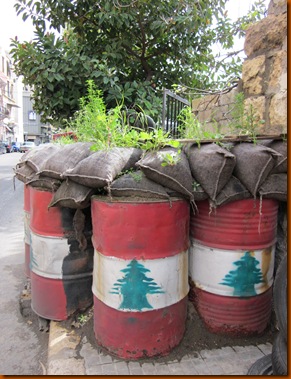 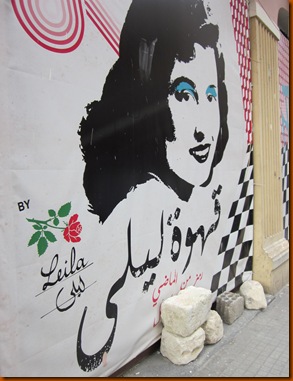 The crumbling but vibrant sector of Gemmayzeh sprawls next to Beirut’s golden downtown where mosques and churches are tucked away behind and in between giant, square, looming shops, where the streets are sparkling and clean, where not a single cobblestone is out of place. Here well-heeled women , beautiful and immaculate, totter from their cars into the nearest designer store while suited businessmen and women eat healthy lunches and watch the near-empty pedestrian streets. 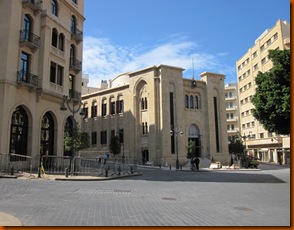 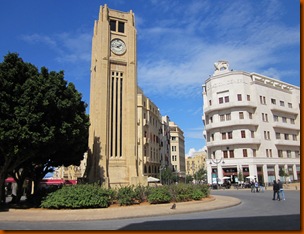 But just when I started to notice how Beirut’s downtown out-Europeans many cities in Europe and how everyone I pass by is conversing in English, just then I begin to see scuttlings of a different downtown, an almost invisible downtown. It starts with the valet services and personal drivers—beautiful dark black men—then I pass a man whose cracked feet are slipped into tattered open sandals—a stark contrast to the polished leather and stilettoed shoes I see around me. I look up at him, a street cleaner in weathered clothes, his skin weathered and dark. Next I notice African women, their hair tightly braided, as they run errands and make deliveries from one shop to the next. Then I see construction workers wearing traditional red and white head scarves, learning later that these men come from Syria and wait at busy street corners for any available job. 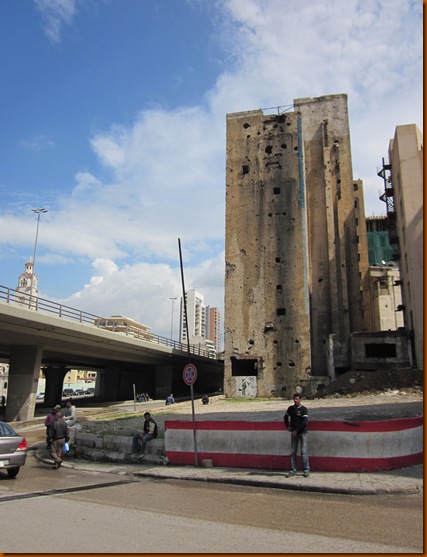 I continue walking west toward the port and that’s when I notice, in the midst of a construction boom, a tall, abandoned, bullet-riddled building. From its location, I guess that it was the Hilton, a hotel with such a great vantage point of the city that it was used regularly by snipers during the war with Israel in 2006. Later, as I turn back, I notice more signs of war—in a statue filled with bullet holes, in other crumbling buildings. 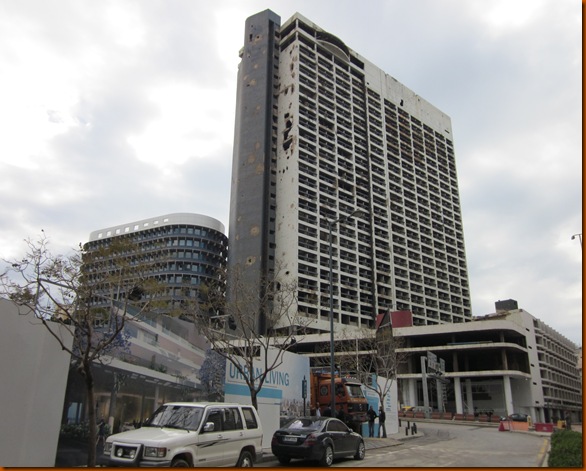 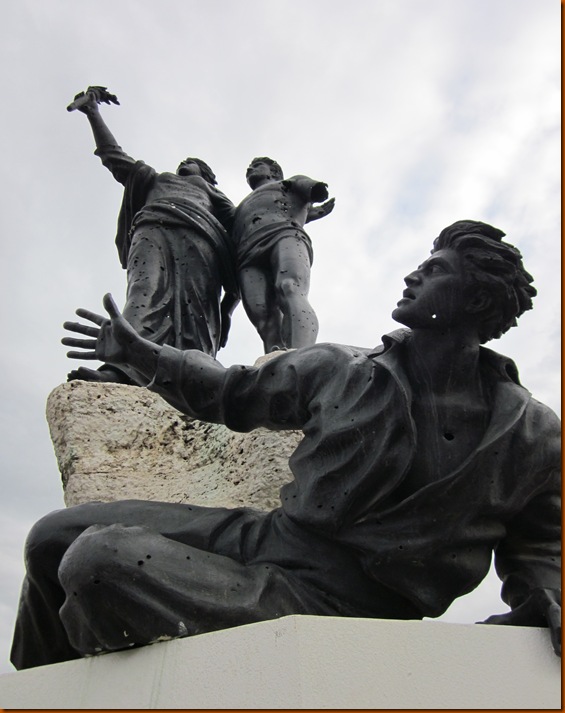 I see the large new, blue-roofed Mohammed al-Amin mosque and next to it the Crusades-era St. George Cathedral. At the foot of the mosque is a sprawling tent, a place for citizens to pay their respects to the ex Prime Minister who was largely responsible for the rebuilding of downtown before he was killed by a car bomb in 2005. Though clearly some citizens respect his vision, others guess he may have been involved in the embezzlement of millions of dollars and they dislike the rebuilding, the whitewashing of Beirut’s downtown. 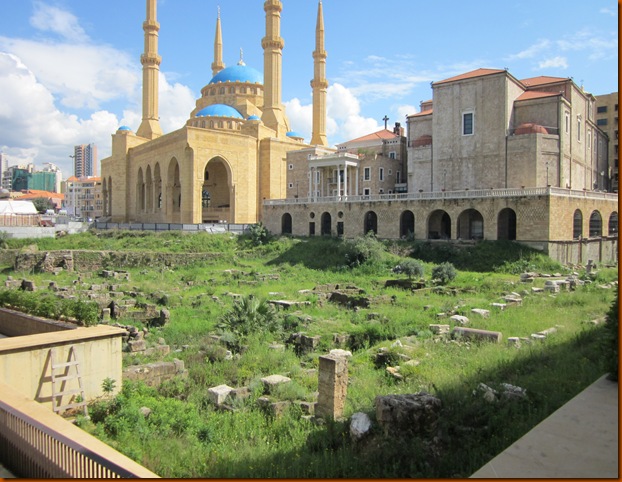 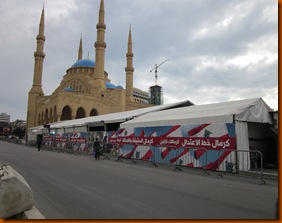 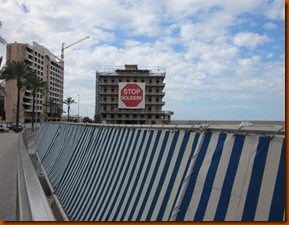 But these are just impressions of the city itself, of Beirut’s people I can say that everyone I’ve met speaks at least three languages: French, English, and Arabic and often switch between an Arabic which is littered with French phrases and words to a fluent English. The switch is seamless, not self-conscious. One language seems to glide into the other, each language chosen because it is better suited for expressing a particular idea or notion.

The taxi driver who helped me find my host’s flat, the corner shop owner who let me use his internet free of charge, the waiter in the falafel stand—people who in other countries would often be the most conservative citizens—here they speak fluent English and they speak fluent European-ese. They express ideas and notions which are at strict odds with the general impression of a Muslim, Middle Eastern country.

It’s hard to reconcile this Lebanon, this Beirut, with images seen on the news. It’s hard to understand how this city and its citizens were caught in the middle of a brief and explosive war only 4.5 years ago.

Posted by bliss vagabond at 5:07 PM

Email ThisBlogThis!Share to TwitterShare to FacebookShare to Pinterest
Labels: lebanon