How can I even begin to give durian its propers? Let me just say this: If I were to die tomorrow I would want nothing but the sweet, custardy flesh of a durian as my last meal in this body. No equivocation. No ifs, ands, or buts. Durian would be my death-row meal. 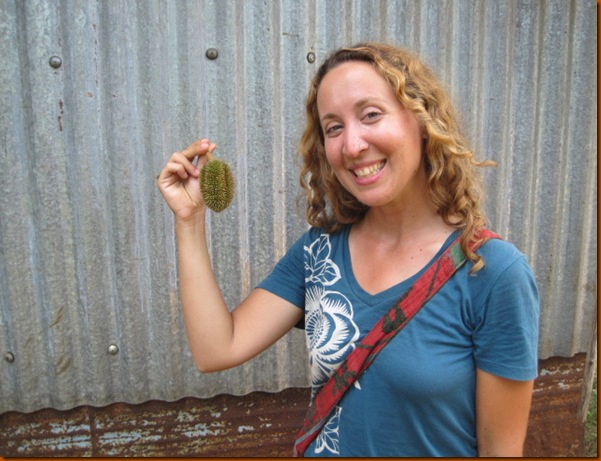 With a baby durian at a fruit orchard in southern Vietnam.

Okay, boring stuff first. Yes, it has a pungent odor. Yes, it is banned from many hotels and public transport. I, however, love the smell. The stronger the better. 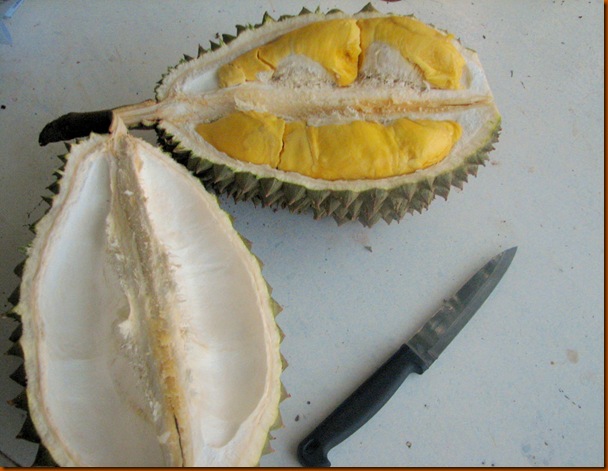 I always tell people who are trying durian for the first time to not think of it as a fruit. It is too rich, too intensely flavored. Think of it as a sweet, almond- and garlic-flavored custard. But every durian is different, has a different flavor profile, so just as one can be a connoisseur of wine, so is it possible to be a durian connoisseur. But I have heard that durian doesn't ship well (though the Thai are developing a variety of durian which can stand up to long-distance transport, but naturally this results in a less delicate, less flavorful fruit), so it is only really possible to be a connoisseur in the appropriate climate. 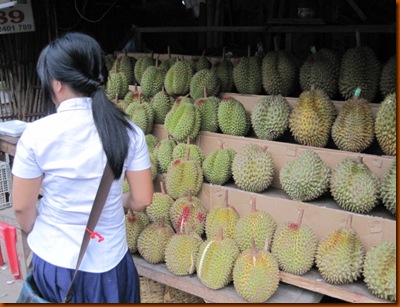 I remember very clearly a moment in Battambang, Cambodia during the hottest months of the year when I suddenly realized, when it really struck me, I hadn't been dry in weeks. Weeks. Every time I showered, I began to sweat before the fresh water even had a chance to dry. For weeks. Only two things made the heat (and no chance of an air-conditioned refuge) somewhat bearable: the mango tree in the backyard and the fact that it was durian season. Ah, durian season! Durians were plentiful, extra-special delicious, and cheap! During the off season, durians ran about 8000 riel ($2.00) per kilo, but in season, I was finding them regularly for 3000 riel ($0.75) per kilo, sometimes less. Because we had a few durian haters living the in house, I never brought my spoils inside, instead splitting them open (an easy task once you know the trick) and eating them on the table outside. There were many days when all I ate for dinner was the creamy flesh of a ripe durian. 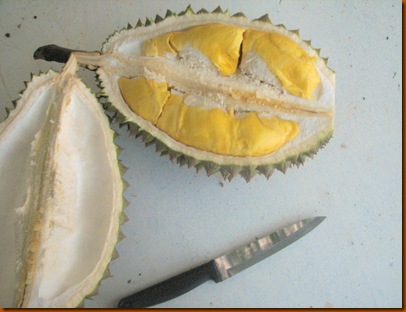 I've heard from Thai and Malaysian friends that the preference for durian varies in each country. The Thai tend to prefer their durian firmer, less ripe, and less pungent, while Malaysians like a very soft and ripe durian. I fall into the latter camp, which, counter intuitively, makes Thailand the perfect place to buy durian as the riper, stinkier fruits sell for less because they are less popular.

Durian is known in southeast Asia as the king of fruit, and mangosteen as the queen. Both fruits come into season at the same time, during the hottest months of April and May, and both are prized for their tastiness (understatement!). Another reason they are considered the king and queen is because durian is known to be a heating food, one that you should not eat too much of lest you aggravate your pitta (I'm taking some liberties here of course, because pitta is a dosha from the ayurvedic tradition and durian is considered heating according to Chinese medicinal tradition), while mangosteen is considered cooling and has the opposite effect. Therefore, you will suffer no negative consequences if you eat durian and mangosteen together.

Posted by bliss vagabond at 1:48 AM