Durian. In January. In Bulgaria.

My love for and obsession with durian is no secret. Let me share with you my excitement after one of the friends I was traveling with returned from a short trip to China with an extra special present for me. 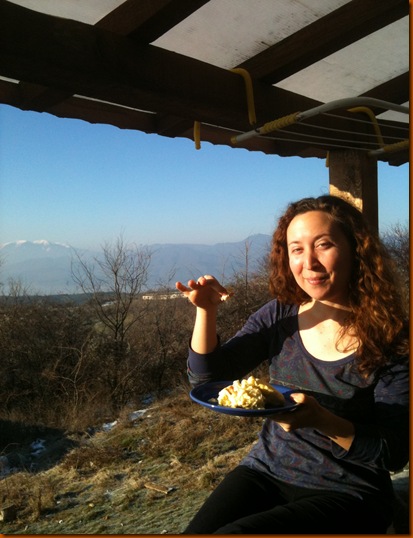 Well, well, well journal. You'll never believe what happened yesterday. I think only caps lock can truly express my feelings on this matter. DANIEL CAME BACK FROM CHINA AND GUESS WHAT HE BROUGHT ME?! HE BROUGHT ME DURIAN! DURIAN ALL THE WAY FROM CHINA! CAN YOU BELIEVE IT! I'M GOING TO EAT DURIAN IN BULGARIA IN JANUARY! LIFE! AM I RIGHT?!

He brought it back for me in a vacuum seal and had spent hours over the span of a few days searching and searching for my durian. Amazing. This may push him over the top into the best gift giver I have ever met. First the headphones, which I really did need, and now DURIAN! DURIAN IN BULGARIA IN JANUARY!

This morning I ate the aforementioned durian for breakfast. Oh, it was a glorious morning—a morning that started with durian can only be glorious, no? Though I had hoped to help Lily, Yan, and Tracy [Lily and Yan were my workaway hosts and Tracy, along with Daniel was one of my traveling companions] all try their first taste of my favorite fruit, the timing hadn't worked out, so only Tracy was around to try durian for her first time that morning. Daniel seemed convinced she would throw up even after smelling the fruit, but I thought that was preposterous. Tracy didn't like jackfruit, though, so I didn't expect that she would be a durianphile. But we were both wrong.

Tracy took her first bite and as she ate it, she looked thoughtful. “It’s better than jackfruit,” she declared as soon as she had processed the experience. “I think I like it,” she remarked after having a bit more time to mull everything over. And soon she was saying, “This is delicious!” as I clapped my hands in joy. With every bite, her devotion became more intense, her understanding of my obsession became more profound. It was such a delight for me to have someone to share my durian love with. And Tracy really did begin to share that love.

We spoke of its taste—a bright, almost bubbly, fermented hit of acid first, followed by a burst of sweetness, then a rich, creamy finish and potent, garlicky aftertaste. And Tracy spoke the idea I had often expressed of comparing durian, in its complexity and variety, to wine. I told her of the World Durian Festival I would likely be attending in Chanthaburi, Thailand in May, of all-you-can-eat durian buffets in Malaysia where you get a chance to try several distinct varieties of durian side-by-side, of the vegan coconut milk and durian ice cream I had found in Bangkok, and of my favorite of all Thai desserts—sticky rice (not with mango!) with durian. Perfection! Sweet coconut sticky rice topped with ripe durian and a salted thick coconut cream and sprinkled with crunchy fried yellow mung beans for a wonderful textural touch. Perfection! 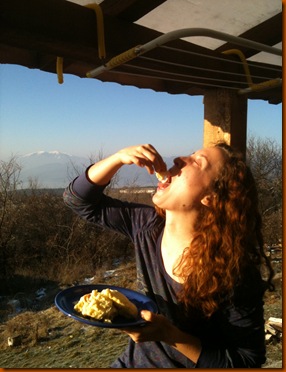 Though there were only two pods of durian, I was more than happy, nay, I was thrilled to share it with someone who could appreciate the fruit (the king of fruit) like I could. What a pleasure to watch Tracy become increasingly addicted, fall increasingly in love with durian. How wonderful now to have someone to obsess over it with! Even minutes after taking her first bite, she began talking of going to southeast Asia next, almost purely for durian.

It was a beautiful morning. I could smell the durian on my fingers and could taste it each time I burped. But more precious than all was the experience of sharing something I love with someone and watching her begin to love it as well.