Besides asking “Why on earth?”, the first thing people ask me about my veganism is “But isn’t that difficult?” The answer is, in some places more than others. Eastern Europe for instance, especially outside the major cities, is difficult to be vegan and healthy in without access to a kitchen.  But Vietnam, ah Vietnam! For ease, health, and deliciousness, Vietnam has been one of my favorite countries to eat in. This is due mainly to what I term as the VVR—Vietnamese Vegetarian Restaurant. 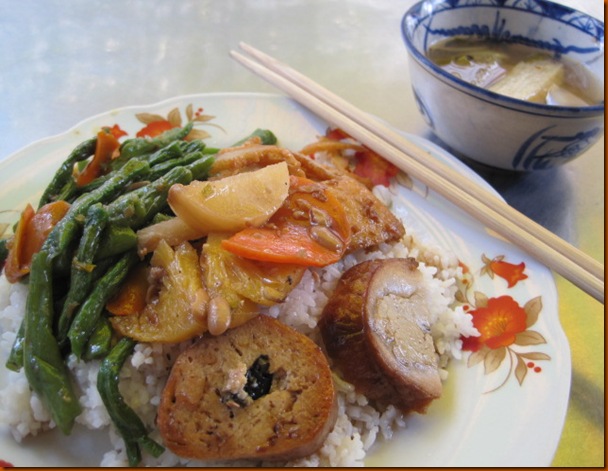 The Vietnamese practice Mahayana, a different type of Buddhism than their neighbors in Thailand and Cambodia. Mahayana Buddhism recommends eating a vegetarian diet for all followers, and requires it of monks. For four days each month, including the new and full moon, a vegetarian diet is practiced by many pious followers of Mahayana Buddhism. Consequently, the concept of eating no animal products is well known and often even respected as a sign of great piety. Another consequence of these four days is that every major and some minor towns tend to have at least one VVR which caters to the religious all month and is naturally more popular on one of the recommended vegetarian days. 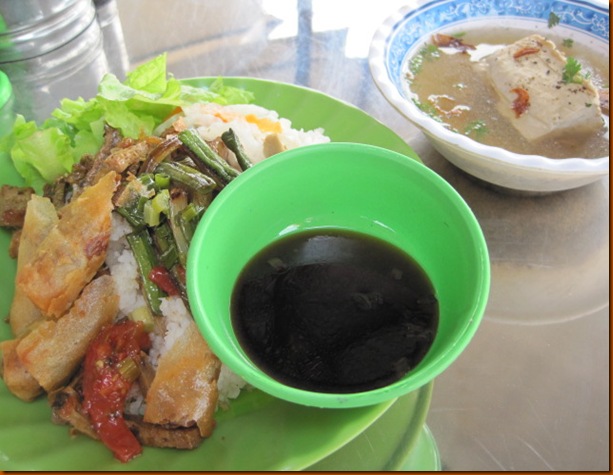 Vietnamese is written in a modified Latin script, which makes reading signs faster and easier, so even while I was cycling down the road, I could scan the signs for those magic words:  Com Chay (Vegetarian Food). 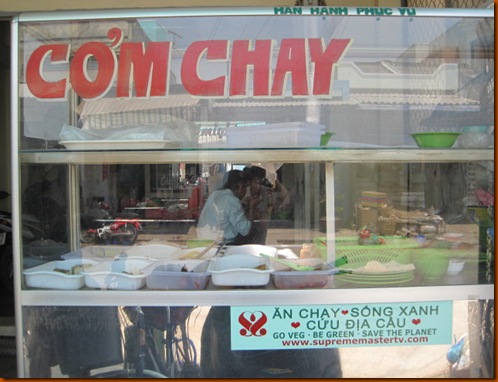 Because the VVRs cater to the general population, their prices are low, very low. All meals I ate across the country cost less than 20,000 VND, with most costing just 10,000 VND. Most have no English menus at all, no English spoken, no tourists. In fact, I can only remember one time when I went into a VVR and saw another Westerner eating there.

So how did I know what to order? In general, you have two options at a VVR. The first option is to choose from a short list of made-to-order noodle soups. Each VVR tends to offer different soups based on the region and the restaurant’s specialty, but some common choices are pho, bun, and mien. (See my previous post to learn more about these noodle soups.) The second option is to order a plate of rice which comes with a selection from the “buffet”. The buffet is a daily range of dishes which you can peek at and sometimes select yourself, but which the proprietor will arrange and serve atop your pile of rice. The daily dishes usually cover quite a range—from a brothy vegetable soup to saucy mock meats to rainbows of stir fried veggies to fresh spring rolls. Some restaurants even serve further specialties like hot pot, banh xeo (filled savory crepes), banh mi (baguette sandwich), freshly made soy milk, and banh bao (steam buns). 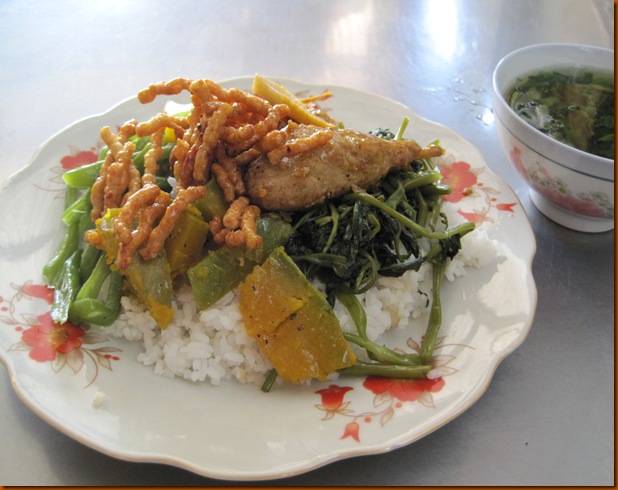 Sauteed greens, steamed pumpkin, lemongrass “chicken” (which used a stalk of lemongrass to replicate the bone), and a brothy green-filled soup.