Two nights ago, determined to meet people in my new city, I took a bus from the suburb of Pin Klao to a Couchsurfing meeting in Siam, the heart of Bangkok. Due to thigh-high flooding on many stretches of the road, it took two hours to travel less than ten kilometers. Once we crossed over the bridge onto the eastern bank of the Chao Phraya river, though, everything was dry and organized, seemingly untouched by the water that had already chased me out of my apartment in the waist-high watery streets of Bang Kruai. 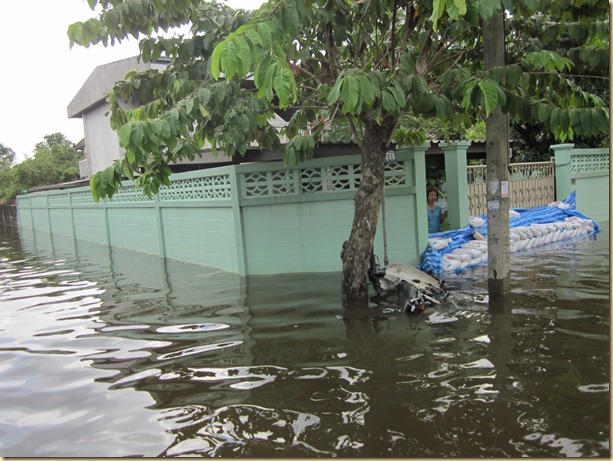 At the CS meeting, in addition to all the usual questions (“Where are you from?” “How long are you here for?”) and the usual light debauchery (drunkenness, socially awkward advances) talk of the flood permeated the dry room. Everyone exchanged ideas about what would happen next, either based on reports in the news or based on rumors. The two were often hard to tell apart.

What most people agreed upon was that the worst of the flooding was to come. The next five days could see enough water to flow over the floodgates that were currently keeping central Bangkok dry. And given that I was now living in an area unprotected by floodgates, it seemed likely, if not written, that where I was living would be flooded yet again.

My experience with the flooding thus far had been calm, despite the army-assisted evacuation on my street in which I and others were assisted out of our homes and out of the neighborhood in the back of a clunking army truck. 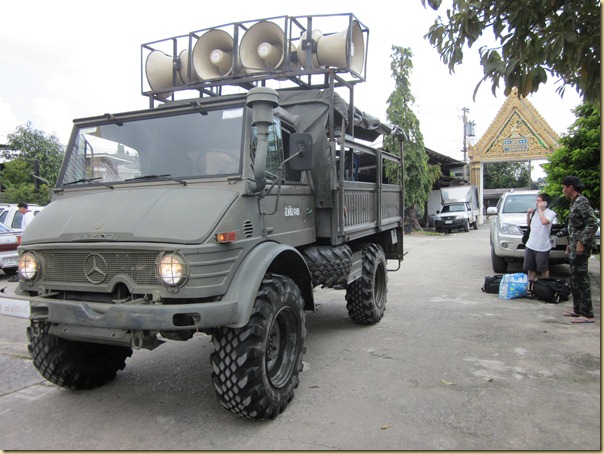 I was met with smiles, even as people waded through waist-high water with full plastic bags of their belongings balanced on their heads. But it would be a false assumption, I think, to conclude that Bangkokians were responding to the flood with Zen-like calm.

For one thing, losing face is a cliché, but very real concern in this part of the world. You very rarely (in fact I can’t think of a single instance) see a Thai person lose her temper or yell. As a friend of mine discovered when he got in a bad motorbike accident and was met with laughter and smiles, this can be a bit disconcerting.

So despite the calm exterior, I saw evidence of panic. Evidence in the empty shelves of every grocery store I walked into. 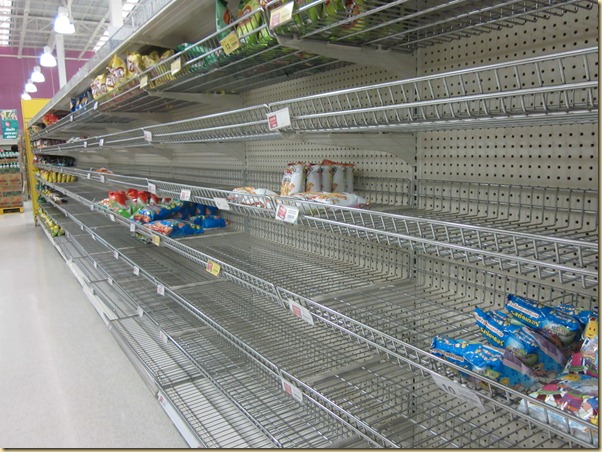 Evidence in the utter lack of bottled drinking water as I walked the streets, thirsty. Evidence in the television sets tuned into the news 24/7. Evidence in the mass exodus of people from the city after the Thai Prime Minister, Yingluck Shinawatra, declared a five-day public holiday and recommended that citizens leave the city.

Residents of Bangkok weren’t the only ones to panic. My mother sent me an email or two, politely but firmly requesting that I get the hell out of the city too.

So yesterday, after waffling about where to go, I made my way through the city to the eastern bus station, Ekkamai. I expected gridlocked traffic all the way to Ekkamai and all the way out of the city, but there was almost none. In fact, the most cars I saw were ones that were parked along the bridges, overpasses, and any other elevated stretches of road as people tried to keep their cars from flood damage. Other than these vehicles, the streets were eerily calm. Most people had left the previous day it seemed.

Now I sit, back in dry and sunny Chanthaburi, waiting for the flood waters to recede and the worst of the flood to be over. I hear the danger will have passed by the first of November, but as with the ideas tossed around at the Couchsurfing gathering nights earlier, it’s difficult to separate truth from rumor.

Posted by bliss vagabond at 1:46 PM