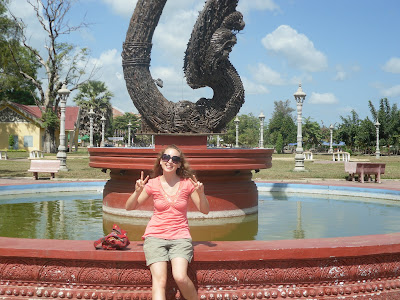 Listening to this song transports me immediately back to Cambodia, back to Battambang.
I had been traveling through the country for a few weeks before I overheard this song and realized he was singing about Battambang, about a city which was becoming increasingly dear to me. (I use the word "city" in only the loosest of terms; Battambang feels more like a low, sprawling town.) Months later, this same song was still being played in every restaurant, every bus, every store I went into but I wasn't tired of it. Not at all. In fact my housemates and I often spent mornings listening to "Oh Battambang" on repeat and at least two of my friends translated the song, using it to help them brush up on their Khmer. And it didn't stop there.
I remember going to a pizza restaurant with a group of Peace Corps volunteers and requesting "Oh Battambang" be played over the speakers. The waiter was happy to comply, and soon, those of us who knew the song were singing along as loudly as we could and teaching it to the rest of the group.
When we heard the music video for the song had been shot in Phnom Penh, we were outraged and became inspired to shoot a video for the song based in Battambang, showcasing the landmarks of the city--Aek Phnom, Phnom Sampeau, Ta dambang statue, the bamboo train, and of course, the Stung Sanker! Unfortunately, as with many of our inspired ideas (making a song out of gecko chirps, sweding Double Indemnity, building a swimming pool in the yard) this one barely made it off the ground.
Here's a link to the official music video. You can see that the only shots of Battambang are actually on green screen. For shame!
Posted by bliss vagabond at 1:12 AM

Email ThisBlogThis!Share to TwitterShare to FacebookShare to Pinterest
Labels: cambodia, melodies and memories