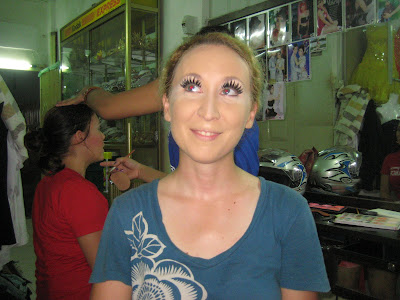 I left my journals along with the bigger of my two backpacks (neither of which are large enough to reach backpacker proportion) in Battambang. I guess that means I'll be going back. Either that or it means that I'll have yet another cache of my stuff scattered throughout the world. I'd like to go back though, I think. 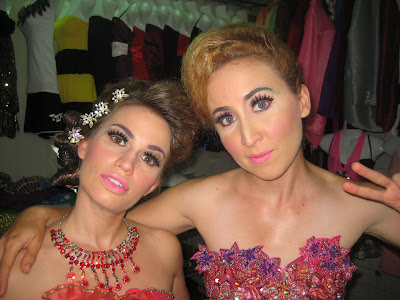 My last day there was a delightful one. We (Mel, Katie, Alanna and I) got twered Khmer-style with inches of makeup and joyously tacky sequined outfits then had our photos taken by a young man who pushed and posed us very meticulously and who often struck the poses in demonstration with such panache that I felt ashamed and shy to try to replicate them. It struck me that his job would be one of the only niches in a conservative Cambodian culture for a man on the effeminate-to-flaming scale. He had more grace than I. Do I sound bitter? I think I've come to terms with my clumsiness; surrounded by dainty, elegant women at all times has had the effect of releasing me from any notion of my own grace.

These pictures were another nail in the coffin. I think I've never looked more like a man, if that man were dressing and posing like Barbie.

The photoshoot was followed immediately by a dance party held at Casa de Battambang—a party at which other people actually showed up. It was such a fun night, filled with yummy drinks, mildly interesting conversation, new faces, and (especially fun) dancing. Justin led a swing dancing lesson right there on our driveway. The men stood in a big circle with the women in a smaller concentric circle. Every few minutes, the women would rotate clockwise and dance with a new partner. I was surprised by how well Justin taught the group. He was appropriately patient, but not too slow, and gave clear instructions and allowed enough time for practice. We danced with and without music. I hate to overuse the adjective, but it was delightful. Smey and his friend, whose name I never caught, both said it was the first time they had danced with a girl. And on that night, they got to dance with seven different girls!

*"Twer" is a very useful Khmer verb which essential means "to make". It has the added benefit of sounding, when spoken in a Midwestern drawl (gettin' twurred), like something a rap star of the last decade would say ("right thurr").
Posted by bliss vagabond at 5:10 AM