Humus for Breakfast, Lunch, and Dinner

Consider this the great humus wrap-up post, in which I look back with nostalgia on humus I ate in Jordan and Turkey. As I write this in Thailand, I try not to think of how long it will be until I taste this most perfect of foods again. 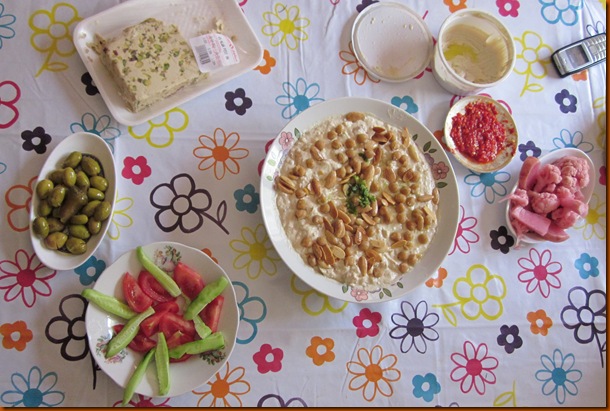 Let’s start with humus for breakfast in Amman, Jordan. While there, I was introduced to a popular choice for Friday morning breakfast (Friday being the beginning of the weekend in the Arab world), fateh humus. Fateh is a lighter, silkier version of humus. It is the only humus which you are expected to eat with a spoon (of course, this never stopped me from digging right in. My appetite for bread is limited, while my appetite for humus is not.). One reason for this expectation is that fateh humus is prepared using bread and is not topped with oil. A dish topped with olive oil is made for dipping because the bread soaks up the excess oil. 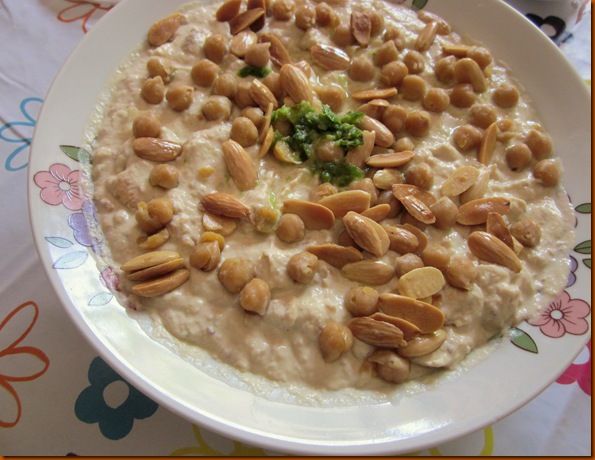 Fateh is made by soaking chunks of day-old bread in the hot chickpea-cooking liquid. This softened bread is then mashed with a few large spoonfuls of humus then, depending on the chef, extra tahini and lemon juice might be added to the mixture. The smooth fateh is then topped with crushed green peppers, whole chickpeas, and roasted local almonds. Because of the chickpea-infused liquid, fateh is always made to order and served warm. Its texture is softer and lighter than traditional humus—silky might be the most fitting adjective—but, as I found out after being unable to stop eating, it will still fill you up for the entire day. A lunch of humus with a simple tomato cucumber salad, bread, some spicy pickled peppers, green onions, and mint

Now let’s jump to lunch and to another country—Turkey. Despite what you may have heard, Turkey is not known for its humus and many Turks have no idea what it is or how to make it. So I was excited when I took a trip with my lovely mother to Antakya (also know as Hatay or Antioch) near the border with Syria. Antakya is know for its delicious Arabic-inspired cuisine and we made sure to sample that cuisine at every turn. 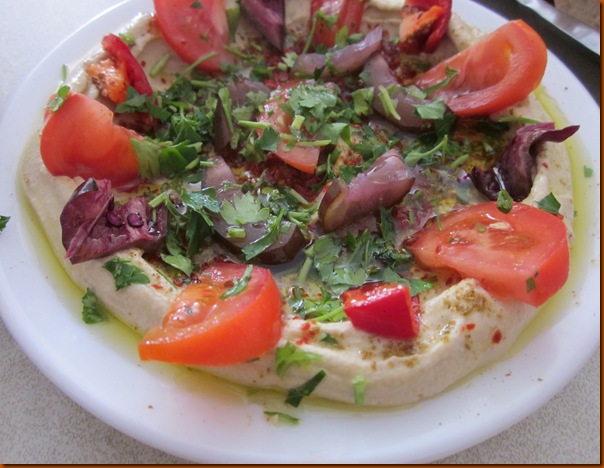 This was my favorite humus of the trip. It was topped with spicy red pepper flakes (which Antakya is famous for), fresh tomatoes, parsley, olive oil, cumin, sweet red peppers, and pickled eggplant. 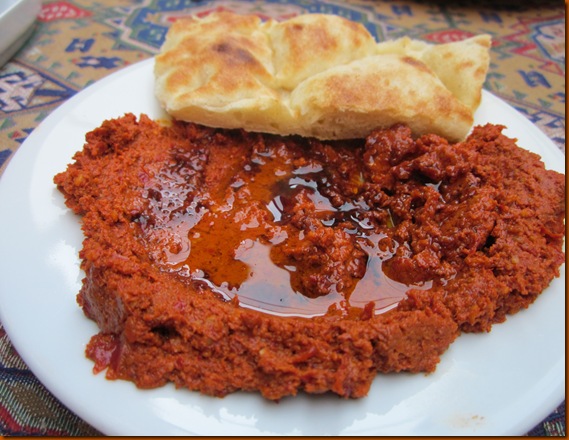 The cuisine in Antakya, despite its obvious Arabic influence, still maintains strong Turkish flavors.  Case in point is the above dish, cevizli biber, which is a paste made from walnuts and spicy salça (red pepper paste). It is delightfully fiery, but also rich and sweet from the addition of the walnuts.

In Antakya, it is common to find signs advertising baklacı and humusçı. In Turkish, the –ci ending denotes a profession and thus can be added to any noun, for example çiçek means flower and çiçekçi is a florist. So a baklacı is someone who specializes in making bakla, a dip of fava beans,  and a humusçı is someone who specializes in making humus. So when my mother and I went looking for our last meal in Antakya, we simply followed the signs and they led us directly to humus. 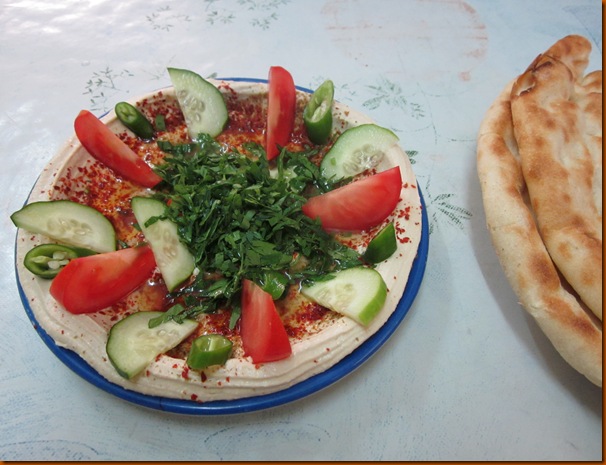 When I first started making humus myself (of course I know how to make humus as it pretty much has its own place in the vegan food pyramid), I became enthralled with the endless varieties and each time I went into the kitchen tried to push the envelope further. What started innocently as roasted red pepper humus soon morphed into chocolate dessert humus. But it wasn’t until recently, until Lebanon and Jordan and south-central Turkey that I came to appreciate the perfection of simple humus. It’s amazing how six ingredients can, at the hands of a master or usta, transform into something sublime.

Posted by bliss vagabond at 7:01 PM