Sneaking into Petra, or, Nothing is Free

I saw Petra for free, snuck in the back route on donkeyback swaddled and clothed like a Bedouin woman. I rode a donkey, a mule, and a camel that day—all for the first time. I drank more Bedouin tea than I can remember, met more people than I can remember, and watched my host free climb the monastery, the largest and tallest tomb face in the compound of Petra. 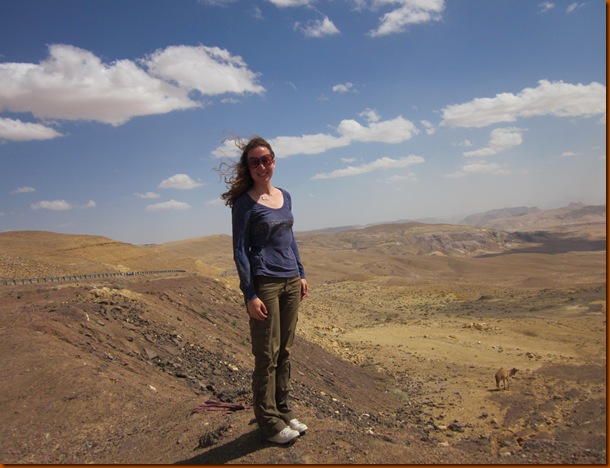 Does it sound like I’m bragging? I suppose I am, just a little bit, but the truth is that I wish I had just paid like everyone else. For though I laughed on muleback up 800 steps to a view of Petra and heard Bedouin flute played live in the great tomb, I also realized that nothing is free and that my proclivity to trust people and to believe what they say is naive bordering on stupid.

It started with a very fucked up night involving,  if I boil the situation down to bare bones, a man in love with his younger paid male companion, who in turn had been hitting on me all evening and wanted to share my bed. It involved two Bedouin cousins who were hosting our unhappy triangle in their bug-riddled small flat and who offered me an oil massage and asked me to come to them, both of them, in the middle of the night. I couldn’t make this shit up if I tried.

The next morning (did I just skip over an eventful night? Yes. Yes, I did.) I tried to make it clear to the cousins that I wasn’t interested in their oft-repeated offer.

“I’m sleeping alone tonight,” I said, emphasizing my point by booking a room at a local guesthouse.

“I’m sleeping alone tonight,” I repeated later when they made it clear that they would both like to sleep with me that night. But, and here’s perhaps the crux of the problem, I smiled as I said it. As I so often do, I smiled while I said no. But then, I’m used to people doing me the courtesy of taking me at my word. 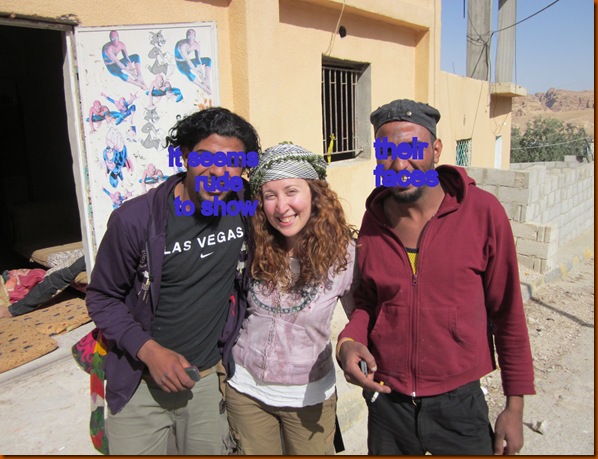 The ground was littered with small rocks, with pebbles, with sand. If I had been walking, I would have needed to watch my footing carefully. But I was on donkeyback, and after imagining quite vividly what might happen to me if the donkey stumbled, I had a reassuring thought. People in this area had been using donkeys for, oh, let’s say thousands of years. If they trusted the donkey, surely I could too. So I relaxed and leaned back (figuratively and literally) and began to enjoy the view. 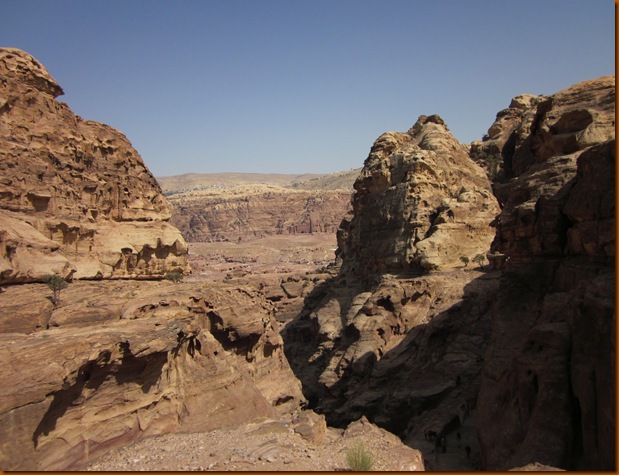 The landscape was beautiful and desolate, with pink-tinged rock faces that hid any sign of habitation. But the cousins pointed out carvings and structures in the surrounding cliffs, and suddenly, like that moment when you finally squint just so and a 3-D picture snaps into place, all I could see around me were the too-regular outlines of man-made dwellings and the flourishes of decorative chiseling. Just as I began to enjoy the view and could see Petra approaching, the cousins decided it was time to take a break. We pulled blankets out of the saddlebags and arranged a spot in the shadow of a tomb carved in the cliff face. Then the cousins pulled a bottle of Sprite and a bottle of gin out as well. Oh good, I thought with a grimace, 2:00 p.m. does seem like the perfect time to begin drinking.

The drinks flowed copiously, though not into my cup. An hour later, after three-quarters of the gin bottle was empty, the younger cousin, Hamdu, began his seduction of me in earnest. He offered me another massage (which appears to be a universal allusion to sex) and when his older cousin, Saleh, left to pee, Hamdu tried to kiss me. He pulled me toward him despite my protestations and when I realized he had no intention of letting me go, I pushed against his chest with my arms extended and my elbows locked.

“I don’t want to kiss you. I told you I’m not interested. I tried to be clear,” I said softly, despite my anger.

“Why are you wasting my time? You’re flirting with me and now you say you don’t want it?” He was angry and made no attempt to be polite.

Saleh returned before I could reply and witnessed some of what transpired.

“Don’t worry about Hadmu,” he told me. “We’ll leave him here to drink while we go to Petra and I show you everything. And you can trust me; I never give something to a woman unless she wants it. I don’t need to force anything.”

“Okay,” I said because I did believe him. It was his cousin whom I felt uncomfortable around, but still, I added for good measure, “I’m sleeping alone tonight.”

So I got back on the donkey and Saleh and I left together for Petra. After five minutes, I could see the huge and sprawling compound before us. I tried to orient myself, as we had come in through a side route. Ahead of me was a small stadium of sorts, immediately to the left was a large tomb, and to my right, down a sharp slope, was a colonnaded street and hippodrome. 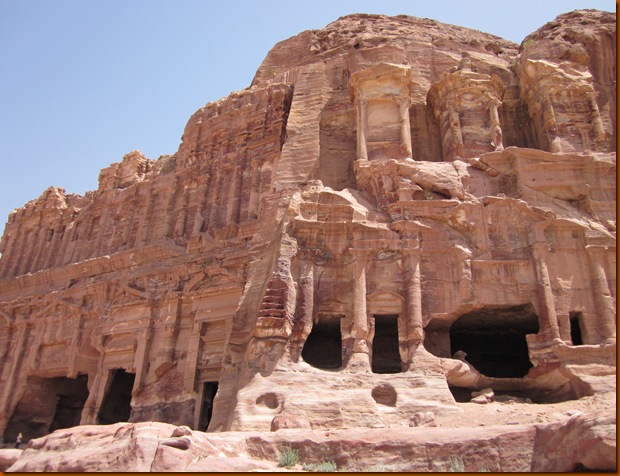 Saleh ducked into the nearby tomb and spoke to a man he identified as another cousin. I was impatient to begin exploring, but felt compelled to wait, to stick to Saleh’s side, lest a ticket checker come around. While I waited, Saleh played his flute and sang in the resonant and vaulted area inside the tomb. At first I thought he was singing a traditional Bedouin song, but then I caught snippets of the words.

“Look at all the tourists,” he sang, his voice trilling. “I wish they would fuck off.” His was a wavering nasal voice and resonated eerily throughout the high-ceilinged tomb.

I was tired of waiting. I’d been waiting now for hours. “Yalla. Let’s go.” 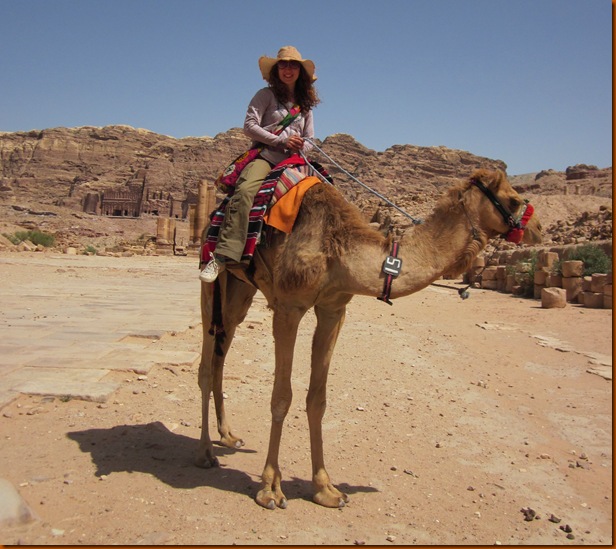 My tour of Petra began in earnest—a whirlwind of stone steps and impossibly large carved structures built an inconceivably long time ago. I met innumerable cousins, one of whom let me ride his camel, while another gave me sugary dark black tea. Soon we were at the monastery, one of the highest points in Petra, and I watched in awe as Saleh nimbly climbed up the structure without rope, without gear, without any equipment. 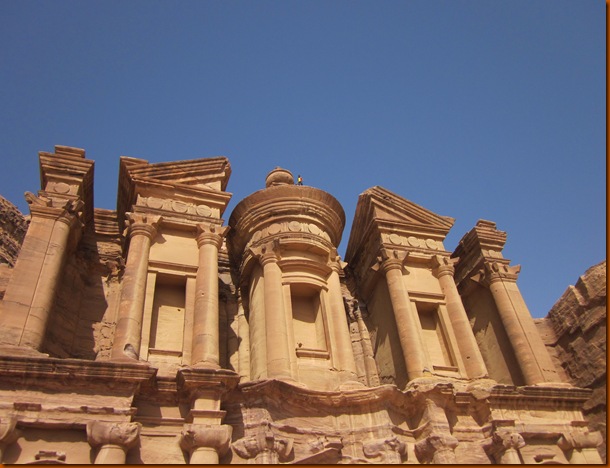 I stood at the base of the monastery with dozens of other tourists, our necks all craned uncomfortably to watch Saleh scale the carved dome roof and jump from parapet to parapet hundreds of feet in the air.

Next we traversed, me still on donkeyback, to one of the highest points in Petra, a point from which I could see no other tourists, only the rocky peaks of gray and maroon hills. It was here that Saleh began to speak vaguely about the magic of Bedouin energy and about giving me Bedouin energy. And I, in my limitless naïveté, thought he was referring to some kind of reiki. When he stuck his tongue in my mouth, I realized that Bedouin energy was yet another allusion to sex. 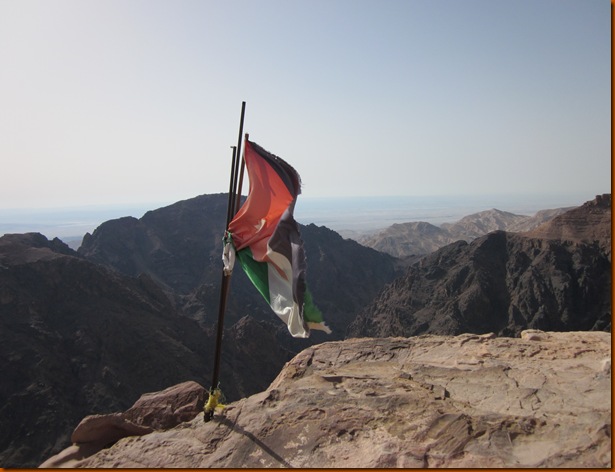 “I’m so stupid,” I said as Saleh and I sat meters apart. I had made it clear that I didn’t want his “energy” and, in fairness to him, once I physically pushed him away, he left me alone. He was sulking though and unhappy as we sat there, waiting for Petra to empty and the guards to clear out so we could sneak out the same way we had snuck in.

I did feel stupid at that moment, but more than that, I dearly felt my dependence on Saleh. I wanted to placate him. Unless I wanted to get caught by the Petra security guards, it seemed that I was dependant on him to get out, to get back to the town of Wadi Musa and to my hostel.

“I’m so stupid,” I repeated, realizing that I had turned a blind eye to my good sense. I had gotten caught up in my greed for adventure, in the lure of riding a donkey through the setting of Indiana Jones and the Last Crusade.

Saleh and I barely spoke as we waited for the sun to creep low and the tourists and guards to head for the exit. Minutes passed, then half an hour. I considered just walking out and paying the $80 ticket if I got caught, but I wondered if that would be the only repercussion. Could I be jailed for sneaking into Petra? It seemed unlikely, but did I really want to find out? Spending time in a foreign jail is high on the list of things that scare me. 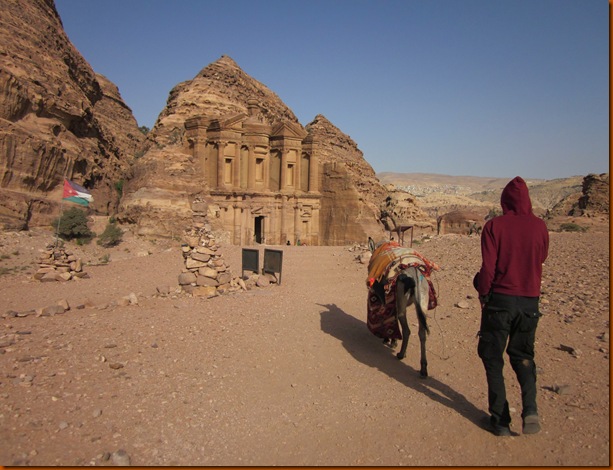 Finally we started moving, slowly, back to the Bedouin village we’d started from.Tired of walking, Saleh climbed on the donkey behind me. The donkey’s bouncing, jerking pace put Saleh and I into close contact. Too close; I could feel his erection pressed against me. I quickly climbed off, happy to stretch my legs and to walk the rest of the way. We stopped one last time to watch the orange sun slink behind rosy cliffs, but I couldn’t enjoy the beauty of the view. I wanted to be anywhere else; I wanted to be alone.

From the Bedouin village I made it back to Wadi Musa and back to my hostel, but the rush of relief I expected never came. My body was still tensed with stress and my mind wouldn’t clear. I played over my mistakes on a repeated, inarticulate loop in my mind. And I struggled with the ramifications of the day. It was tempting to crawl inside myself, to avoid talking to strangers, to never smile.

But strangers often approached me, often with true offers of hospitality. So how could I differentiate those genuine offers from the disguised solicitations for sex? I had tried honesty; that didn’t seem to work. Distressingly, my instinct for whom I could trust seemed to be failing me.

I had no answers then and I have no answers now. I am trying to temper my openness with reserve, with caution. But my delight in meeting people and my lust for adventure usually wins out. Maybe that’s for the best. After all, bad memories fade and all that remains is a good story—a story of sneaking into Petra on donkeyback swaddled like a Bedouin woman.

Posted by bliss vagabond at 9:50 PM