Shelter and Sisterhood in Vietnam

This is the first in a series of posts dedicated to the amazing people I meet while traveling, people who provide me with much more than assistance. These are people who open their hearts to me and whom I will always think of as family. These are my angels of the road.

The following flashback is from my time cycling through Vietnam. 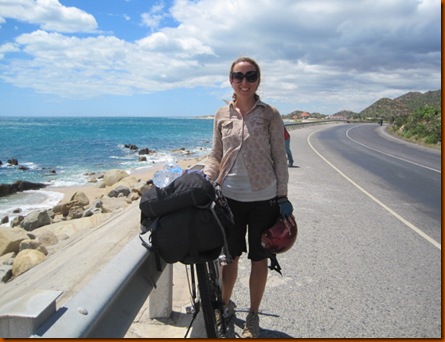 I was hungry after having only fruit for breakfast, so I stopped at the first place I saw. It was on the opposite side of the highway, though, which is something I try to avoid as this is no country road but the busiest highway in Vietnam. From my perch atop Bowie (the name of my bicycle), I could see the place served banh mi. Perfect. Since I had a jar of chunky, Vietnam-made peanut butter in my pack, all I needed was a little baguette (ridiculously cheap too—usually costing about $0.08) for the perfect, tasty lunch.

A young, slight girl who spoke some English approached me as I tried (awkwardly) to balance my bike and unload my small pack from atop the larger one. I walked with her and explained what I wanted, adding, “An chay” to make my bizarre choice of plain bread more understandable. Her father waved me over to sit at the table with him and his wife and daughters. I happily did, but, as he spoke no English, wondered what we would find to “talk” about for the duration of my lunch. We pantomimed about basic things, I showed them my map, and the daughter provided translations for the slightly more complex ideas. 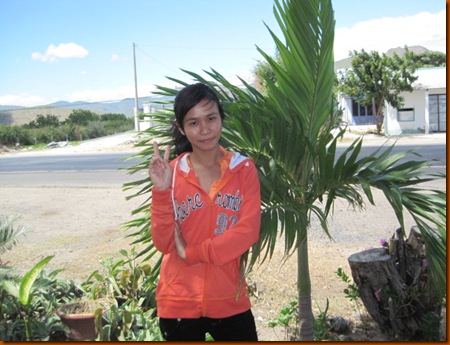 Soon they were bringing out food and treats for me to partake in—candied ginger (a traditional Tet, or Vietnamese New Year treat), fresh papaya, watermelon seeds (damned difficult to open), a sugary puffed rice treat which was crispy and filled with ginger and crystallized sugar.

Then they started outright giving me things! The father packed up the container of candied ginger for me to take and added to it banh in—some kind of special Tet treat that was all white and sugary and rectangular. Then the daughter, An, brought out a heart-shaped gift box. I shyly opened it. Inside was a soft pink wide wristband. She indicated it was a scrunchy for my hair. How perfect! My pink sparkly hairband was in truly awful shape—dirty and stretched out and always catching and ripping on my tangled hair.

I was delighted, but also ashamed. What could I give to them? What did I have? Not for the first time I wished I was carrying a supply of gifts. Then I thought of my books. The Little Prince! It was filled with delightful pictures and the story was simple and maybe someday she would be able to read and understand it. So I fished through my backpack and gave it to her, trying to indicate through hand gestures just how treasured it was to me. “My favorite book,” I repeated.

I don't know exactly how it happened, but when we went back to the table to sit and I began rifling through my smaller pack in preparation to leave, An mentioned she wished I were part of her family. Then she said something to her father in Vietnamese, smiled and turned to me, saying that they would like it if I would be part of their family for that afternoon and night, that I should stay with them. I'm sorry to say that I hesitated. I really shouldn't have; it was an extraordinary offer. But in my defense, I was simply a bit concerned about time. So I got out my map again to see how far I had to go until Mui Ne, the next big town. Could I do the remaining distance in one day? Yes, it seemed completely plausible. So I smilingly agreed.

An was immediately jubilant. She jumped up from the table, lightly grabbed my arm and steered me toward a room in the back which had an altar and old photographs of the family's deceased relatives. She lit a long stick of incense then handed it to me, indicating that I should place the incense above the altar. I wondered, is this a ritual just for family members? 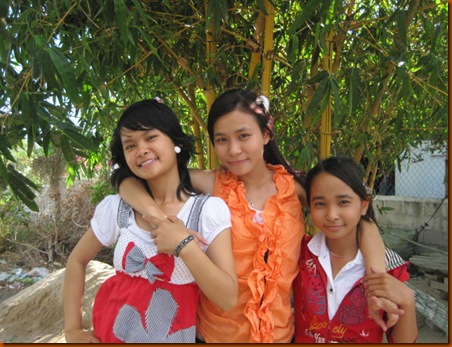 Then she led me into her room which she shared with two younger sisters, one fifteen and one twelve. She herself, despite looking much younger to my eyes, was only nineteen years old. She said I should feel at home and asked if she could call me Sister Sarah. I agreed, tickled by the ecclesiastical undertones, calling her Sister An in return. She invited me to bathe, which was a welcome invitation after a few hours cycling in the hot sun. I bathed quickly in the outhouse, splashing myself with water and washing my hair as best I could. Around An and her sisters, all of whom dressed neatly and meticulously, I had been acutely aware of my sweat-stained outer shirt and tangled, messy hair.

After a light lunch, the girls showed me a video of An singing beautifully at some kind of celebration. She had a lovely voice and did some very sweet dance moves, all while wearing a cowgirl-inspired outfit which might have been ridiculous on someone else, but she was such a cute little thing, I think she could have worn anything. Then we did some karaoke, and after a little persuasion I too decided to sing. I started with “We Wish You a Merry Christmas” because it was the only English song, then I passed the microphone to the sisters. The eldest two had simply stunning singing voices and moved with such grace and ease. 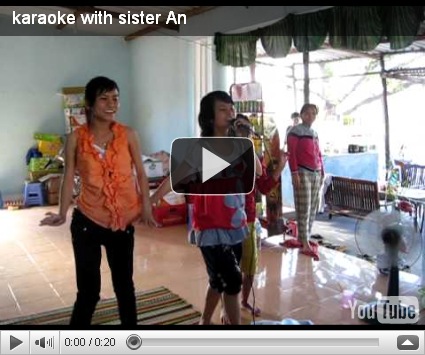 The sisters told me I was beautiful, even before I had bathed my fatigued, sweaty body. And they loved my hair. But I didn't see how they could truly think I was beautiful. Oh, that's not self-deprecation. It's just that I violate so many Asian standards of beauty, especially now. I have dark, tanned skin. Really. My legs are the color of a roasted turkey at Thanksgiving. I have freckles and I am too tall and too big and too clumsy. In many ways, I am the antithesis of the standard of beauty here, in which being graceful and pale, with as white skin as possible, is seen as beautiful. I think the only way to reconcile this paradox is to agree that the sisters were holding me to entirely different standards of beauty. So while they may find me beautiful, they would never want my dark tan or my freckled skin. 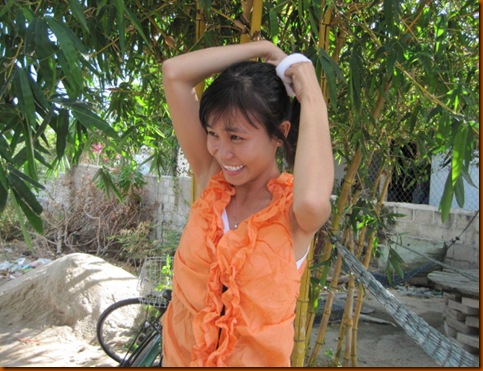 That afternoon, though it was clear that the normal activity would have been to sleep a bit, we all piled onto the family's motorbike. The girls took great care in preparing for the trip. They wore face masks and long gloves, as well as hoodies with long sleeves and the hoods pulled over their heads and tied tightly under their chins. In contrast, I wore my cut-off jean shorts and a short sleeve shirt. I was already as dark as I'd ever been and, while cycling ten hours a day, I simply found it useless to fight the tan. So the four of us squeezed on and rode into the nearby town of Vinh Hao, famous for its mineral water, to take the type of photobooth kitschy photos that are so popular in Japan. You know the ones—you can edit them afterwards, adding bows and hearts and writing to the foreground and a snowy background or a background populated by Hello Kitties. We drank sugar cane juice with ice and a bit of orange juice mixed in, which Sister An insisted on treating me to.

The sisters took a little nap and bathed before dinner, and as she was changing her clothes, An asked me a question I never expected to hear. “Do you think I'm thin?” she asked, her face tight and worried. My goodness! “Of course you are thin!” I answered immediately, knowing the crushing effect of hesitance. This girl was tiny, tiny, tiny. She was pocket-sized—as slim and slight as a child. Why on earth would she worry about a thing like that? But I understand. Girl, do I ever understand. Beauty standards infiltrate and insecurity abounds in everyone; the skinny and the symmetrical are no exception. 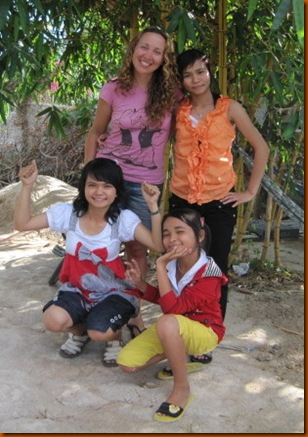 I felt like an oaf in comparison to her and in the past few months I had gained weight and no longer recognized my own body. But I was beginning again to feel comfortable in my skin. Especially once I started cycling—on that first day, with no preparation or past experience, I cycled 75 km—I really began to see what my body was capable of and it made me grateful. Grateful for strong legs and strong lungs. Grateful for a constitution which, after cycling for ten hours can still be vibrant and full of energy, propelling me out of my hotel room and exploring whatever town I'm passing through.

I met some of the extended family at dinner—aunts and uncles. We conversed through smiles and laughter and soon An translated her uncle's complimentary comment on how tall I was. They were all impressed with my stately height. Well! At 5’4” or 153 cm, this was certainly a new experience! But he was right. I was a bit taller than him and a few good inches taller than everyone else in the family.

After dinner we lay and watched TV on a woven mat on the floor. An's middle sister brought out pillows and blankets, and so, instead of using the girl's bedroom, we fell asleep there on the floor. All the women in the family—An's mother and her sisters and now me—slept in the open air of the front balcony of their house/roadside restaurant. Though An's mother joined us on the floor, I was aware that she got up several times during the night to serve hungry customers. Their restaurant was located on the busiest highway in Vietnam, after all.

I awoke with the light, as did the entire family. I efficiently gathered my things; weeks of experience had made packing up a well-worn routine, and I was soon saying goodbye to the lovely family that had taken me in and embraced me.  I hugged and kissed them all in turn, saving the biggest hug for Sister An. I saw myself in her—someone endlessly curious about people and the world. I saw in her what I wanted to be—someone open, caring, courageously sharing herself with strangers.

I couldn’t linger; I had a long way until my next stop, Mui Ne. But as I cycled off, I wished I could shelter Sister An somehow, shelter her from the pain that comes with such openness, shelter her from the insecurity of caring what other people think. But who am I to lend her strength, I who know the pain of bending under the weight of my own insecurity? Maybe we can shelter each other, maybe we provide each other with support, with—what is the word? oh yes—sisterhood.

Posted by bliss vagabond at 7:13 PM

Email ThisBlogThis!Share to TwitterShare to FacebookShare to Pinterest
Labels: angels of the road, cycling, flashback, vietnam