Yesterday morning at 3:00 a.m. monks began chanting over a loudspeaker near where I’m sleeping in Battambang. Today again, they began at 3:00 a.m.

Happy Pchum Ben Day! This holiday, translated sometimes as the Festival of Ancestors or the Hungry Ghost Festival, is the second biggest holiday in Cambodia after the New Year festivities. It’s officially celebrated for three days, but families who can afford it will often begin visiting the pagoda weeks in advance.

The holiday is similar to the Mexican holiday Dia de la Muertos in that it is a festival dedicated to honoring and feeding deceased ancestors. But in Pchum Ben, families don’t go to a gravesite; instead they often return to their rural homes and visit the pagoda a few times throughout the holiday.

The basic idea is that at this time of year, and this time only, ghosts can slip out of hell and wander back on earth. Because they’ve been in hell (less than ideal conditions) many are hungry. Thus it is customary to throws grains of rice or balls of sticky rice for these ancestors to eat and enjoy. When the festival is over, a few may gain pardons, while most will return to hell. The ancestors who go to heaven (assuming there are any) don’t get much mention as far as I can tell during this holiday.

Of course, like most holidays, Pchum Ben is a time for family to be together and to prepare and eat special food. One food commonly made (at least here, in Battambang) is Nom Ansom Jaek, or sticky-rice-wrapped bananas steamed in banana leaves. 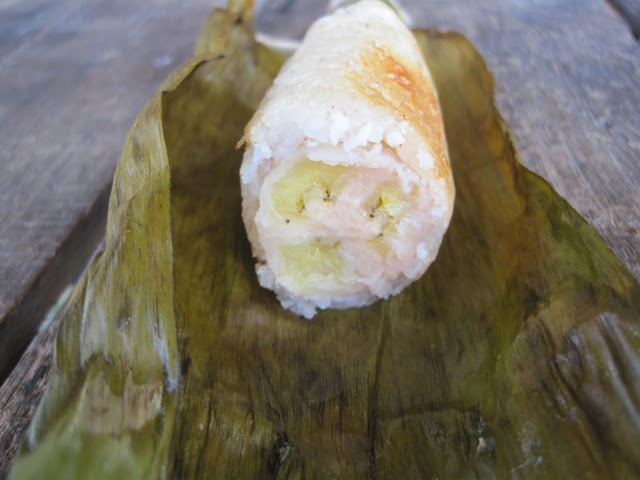 Our neighbors here at the Kinyei office gave us some Nom Ansom Jaek which I enjoyed for my dinner last night.