I feel the way about natural disasters I do about death. Yes, death happens, but it’s always happened to other people. It’s easy to be complacent. It’s also easy to see a pattern—I’ve never died—and extrapolate a false conclusion—I’m immortal.

And I had a good streak going, until I came to Bangkok.

I’m not dead! But I am experiencing my first natural disaster, up close and personal.

My first hint of flooding was when I was picked up and taken to my new apartment. “Which way should we go?”Acharn Lan mused aloud. “The longer way has traffic, but the shorter way is flooded.” In my mind the flooding was trifling, ankle-deep at most. But when we passed through those flooded streets, we left a wake behind us, as if we were in a motorboat. We turned a corner from a flooded street to a dry one, and there, less than 500 meters away, was my apartment building.

At the time, I just thought how lucky it was that I was on a dry street. Instead I should have been thinking about my street’s proximity to the flooded streets, but I was never one to look on the negative side. I can barely see the clouds; I’m looking at all those silver linings.

Imagine my surprise then, after exploring my new neighborhood, when I returned to my previously dry street and found it flooded with water up to my mid-calf. I tried to wade through it, but my flip flops kept creating drag, slowing each step. So I took them off and stumbled down the street, trying to avoid the hidden pitfalls. The water was already muddy and opaque. Still, seeing the silver lining again, I was glad the water didn’t smell like sewage.

I awoke the next morning, completely surprised to find that the water, instead of slinking away, had risen. I walked down the street to work and this time, the brown water sloshed around my knees. When I returned to my apartment, the water was above my knees and the building, previously dry, was now slicked with a thin layer of flood water. My apartment on the second floor was unaffected. The three biggies—electricity, internet, and plumbing—were still working so I hunkered into my tower. So far I was only mildly inconvenienced by the flood. The song theows, the only nearby form of public transportation, had stopped running. The water was too high for them. In fact, the water was too high for all vehicles except trucks and boats. That afternoon, the trucks were outnumbering the boats, but I noticed the ratio evening out in the evening.

That night, when I opened my curtains and went to bed, I noticed undulating soft patterns on my ceiling. The light from the street was reflecting off the water and sending those muted reflections into my room. I could even hear gentle lapping against the side of my building whenever a vehicle passed. It was like sleeping at a lakehouse.

When I awoke, I was again surprised to find that the water level had risen further. Where was all this water coming from? It seemed a mysterious prospect to me. We weren’t near the river, nor any canals. In fact, plenty of other places were closer to bodies of water, yet they were unaffected. A little googling soon gave me more information. Due to heavy rain during this monsoon season, water from all over Thailand was making its way to the gulf. Bangkok, of course, was on that path. But the city of Bangkok was largely protected by vast walls of concrete and/or sandbags. The government was diverting the water away from central Bangkok which meant that the water couldn’t pass quickly through on its way to empty into the Gulf of Thailand. Instead, the water was hanging out, just loitering in my neighborhood and others. 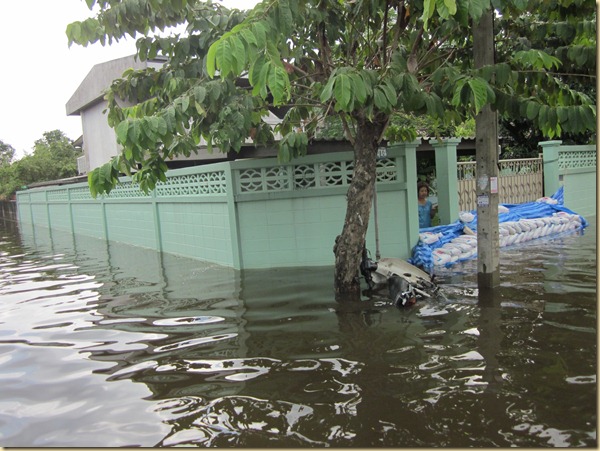 The first thing I checked that morning was electricity. Still working. Relieved, I brushed my teeth and peed. I flushed the toilet, but the water just filled the bowl and then gurgled. Right. No plumbing. I looked out the window and could see people wading by in thigh-high water. There were no trucks anymore, just boats and rafts and pedestrians balancing full plastic bags on their heads.

I got a call. It was time to evacuate. I gathered my things, repacked my bag, and waited. I hopped into a raft and from the raft into a large, lumbering army truck. Soldiers took my hands and took my bags and hauled us all into the back of the truck. There were about ten people and three chairs back there and after some quiet shuffling, we all tacitly agreed the elderly passengers should sit in the chairs. The rest of us squatted or stood. 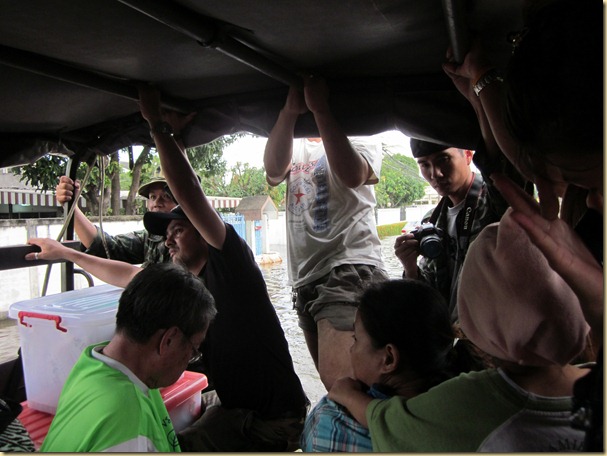 At first I felt shy about taking out my camera, but I soon noticed that almost everyone in the truck and everyone on the flooded streets we passed had cameras or camera phones. Even one of the soldiers on the truck had a large, professional-looking Canon and he was snapping pictures and taking videos just like the rest of us.

I couldn’t help but muse on how technology is changing the world. Yes, it’s cliché, but bear with me for a minute. It’s a different kind of a world when people are tweeting about a disaster as it strikes them, when people are posting videos and pictures in real time. 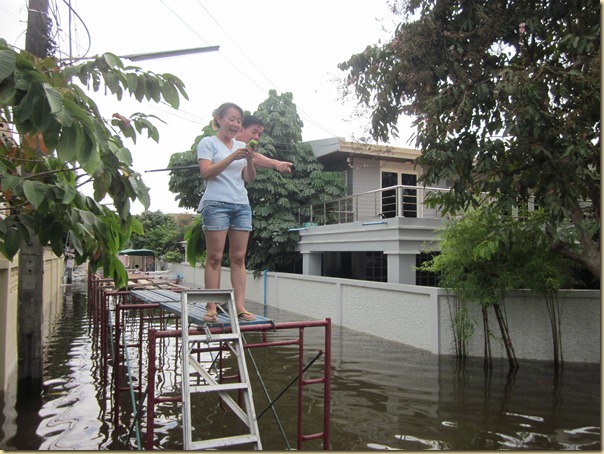 Somehow it feels less desperate when you’re surrounded by people armed with camera phones, when a soldier helping you evacuate is taking your picture as he does so. Though some people may think that technology acts a barrier, keeping people at a distance from each other, in fact I found it was the opposite. All of us with cameras, we were speaking the same language. We were saying, “Would you look at this? Unbelievable isn’t it?”

Soldiers help a family onto the truck

Of course, you would expect camaraderie to form during a time of crisis. And it did. On that truck, there was an air of congeniality. There were jokes and laughter, none of which I could understand because they were in Thai. But I smiled at everyone around me, and they smiled back. And we all laughed when a man, a woman, and their dog stood in front of their flooded house and wanted to get on the truck. “Is there room for our dog?” the woman asked a soldier. “Of course,” he replied and quickly waded out to them, picking the dog up in his arms and carefully carrying it to the truck.

We all shifted our positions to make room for the new passengers. 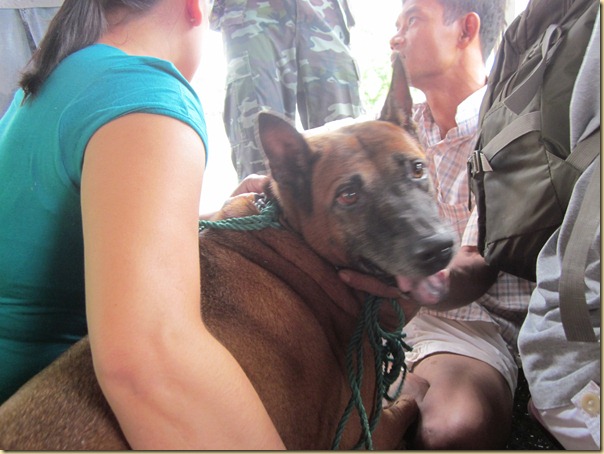 From there, it didn’t take long to make it to dry land. Just crossing the border from Nonthaburi into Bangkok was enough. 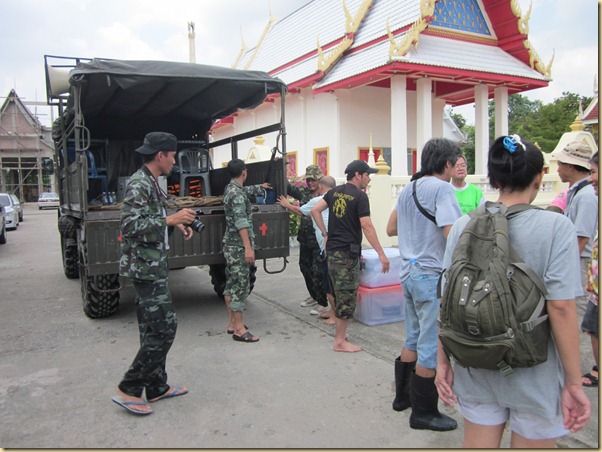 But we’ll see what happens next. There are rumblings that the government will open the floodgates and allow all of Bangkok to flood. Sounds crazy, but it would probably be the best solution. That way, the water can freely pass through on its way to the Gulf of Thailand. In other words, the alternatives seems to be: 1. Keep the floodgates closed, thus (likely) keeping central Bangkok dry while condemning the rest of Bangkok to weeks, if not a full month of flooding, or 2. Open the floodgates and allow most of the city to flood, though likely just a few inches and just for a few days as the water empties into the gulf.

As for me, that silver lining is practically blinding. I can escape the water. I’ve no property to be damaged by the flood. Maybe it’s time for a trip to the beaches of southern Thailand?

Posted by bliss vagabond at 3:55 PM