Hitchhiking to Konya and the Flute that Tells Allah’s Secrets

The rides that brought me to Konya were all pretty good, though there was some confusion (to put it kindly) with the first driver (a truck driver, I feel compelled to add because the stereotype is sometimes true). While trying to explain that I sometimes had problems with drivers misunderstanding my intentions, he began to compliment me. “Çok güzelsin.” And soon he was asking me for a kiss or to lie in his bed. Oh great, I thought. Here goes. But once I said that I was a good girl, and that if there was a problem I would leave the truck (“Eğer sorun var, o zaman ineceğim.”) he quickly cleaned up his act and was actually decent for the remainder of the trip. He even had a little self-conscious sparkle in his eye when he advised me against getting in trucks because it would be too dangerous. 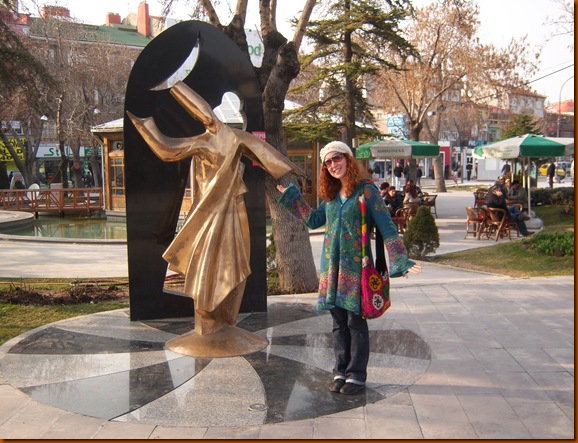 The last ride was with a very sweet Kurdish man who traveled around Turkey selling or distributing medicines and supplements like omega three and six. He was easy, so easy to talk to. I think he had had experience in the past talking with people who understood little Turkish because he was able to use almost entirely words that I could understand.

It was a good day for communication. With the first driver I was even able to have a political conversation, talking about Obama and how I thought he was good at first but he hasn't seemed to do much at all since he's been elected. I asked about Erdoğan and gave my opinion on the improved state of Turkish economy since he's been elected. 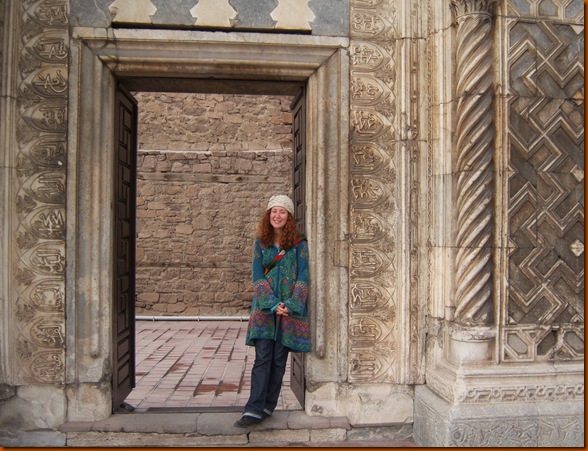 Outside a Madrasa in Konya

When I got into Konya I quickly noticed a difference from Ankara, where I had just been. I have never seen so many young girls and women wearing the headscarf as I did in Konya. In many other Turkish cities, it is almost exclusively older women—mothers and grandmothers—who wear the headscarf, but in Konya even the university students wore the Turkish conservative “uniform” of a long tan button-up coat and vivid floral headscarf. 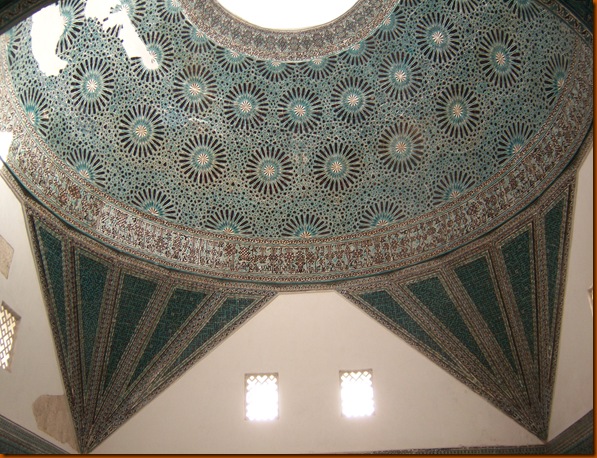 The tiled roof of a Madrasa in Konya

I want to relate a parable that Huseyin, my host in Konya, shared with me about the type of flute he plays, called the ney. One night, the prophet Mohammed was called up to speak with Allah and while there, Allah told him 90,000 words—sacred secrets. When Mohammed came back down to his bed, he found it was still warm from where he had left it. Time had ceased to pass while he was gone.

In the next days, he found himself deeply troubled by the words and the secrets that Allah had shared with him, and Ali, Mohammed's closest follower, noticed Mohammed's pensiveness and asked him what was wrong. Mohammed didn't want to burden Ali, but told him that he had some secrets that were weighing on him. Ali encouraged him to ease his burden.

“Why don't you tell the secrets?” he asked Mohammed.

Mohammed agreed that it might help, but couldn't bare to give Ali such a heavy load, so he only told Ali 30,000 words. But even these words and these secrets were more than Ali could handle, so one day Ali leaned into a well and shouted the words to the bottom of the well. But the well also couldn't contain the words, and so the water inside began to bubble up and rise and soon the water flooded the entire plain around the well. And around that well, weeks later, a unique kind of reed began to grow and when it grew and the wind blew around it, the most beautiful sounds could be heard. A passerby, who loved the soft sounds, had the idea to fashion a flute out of one of the reeds.

A few weeks later, Mohammed and Ali were passing this field and heard someone playing the flute, the ney. Mohammed heard the sound of the ney and immediately understood that the flute was telling the secrets Allah had shared with him, so he turned to Ali and asked, “Who did you share the secrets with?” But when Ali explained, Mohammed couldn't be angry, and in fact, he well understood the burden of those 30,000 words.

It is said then that the ney sings Mohammed's sacred secrets from Allah, but the secrets are told with Ali's breath.