I love Turkey. Have I mentioned that before? It's impossible to list the reasons, or even begin to explain them all and this often keeps me from writing about my experiences here. So instead of trying to summarize my feelings and my love for Turkey, I've written a bit about a (pretty typical) day I spent recently in Adana.

I went to a little restaurant which specializes in gözleme—something like the Turkish equivalent of a crepe. I ordered an ıspanklı, peynirsiz (cheeseless, with spinach) gözleme and as it was cooking, I chatted a bit with the owners. The wife asked me why my hair wasn't covered, telling me I should cover it according to Islam. When I told her and her husband that I wasn't religious, but do believe in God, he responded that I should become Muslim. I was taken aback by this, as in all my time in Turkey, this was the first anyone has ever said anything to me about converting to Islam or anything to me about covering my hair when I'm not in a mosque or other religious site. I even feel a bit hesitant to write about this occurrence lest it enforce a (in my opinion, false) stereotype of Turkish Muslims. So let me repeat again, this is the first time that anyone has ever said anything like this to me in Turkey. Often people will ask out of curiosity about my religion, and no matter how I answer, they smile; but in honesty, when I answer that I have no religion but do believe in God, their smiles broaden. 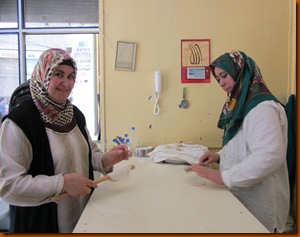 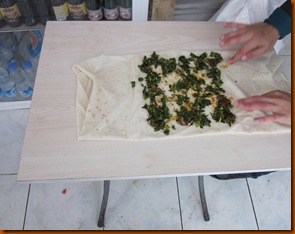 Now in sharp contrast to my conversation in the gözleme restaurant was my conversation with the photographer who took my passport photos. I sat by his computer and watched as he photoshopped the picture of the woman who had come in before me. He pointed to her head scarf and, with a disparaging look, told me it wasn't necessary, it wasn't important. He then pointed to her artificially red lips and copious makeup and asked why, if she wears the scarf does she feel the desire to wear so much makeup as well?

Then I watched as he photoshopped my passport photos, erasing the freckles on my face and smoothing out the darkness under my eyes. I laughed and told him it wasn't necessary; after all, there were just passport photos. “Önemli değil.” But we had a nice, if standard conversation about my travels, my time in Turkey, my new nephew. He invited me to drink something.

In Turkey, if you accept every invitation to drink çay, you will easily be downing seven, eight, nine glasses of çay each day. It is common practice, in just about every shop and in every home, to be offered something to drink and this drink never carries with it an obligation for anything else other than conversation. However, my tolerance for caffeine is getting lower, so I'm grateful that I am able to turn down the offers with an explanation. If I couldn't communicate why I was saying no, I might feel obliged to say yes for the sake of politeness.

Next I searched for cezerye to send back to my mama. Cezerye is similar in texture to Turkish delight, but is made with carrot puree which has been boiled down and down to bring out its natural sweetness. Usually some sugar is added, but not much. Depending on the quality, it can have a just sprinkling or a ton of pistachios, hazelnuts or walnuts crammed inside. I ducked into two şekerleme shops in my search for cezerye, and in both stores I was fed samples of just about everything. I'm normally not one to refuse free food (especially sweets) but I soon had to turn down some of the samples because I was just so very full. Despite their walls of sugary candies, şekerleme shops are also a source of high-energy and healthy snacks—snacks made of grape juice, mulberry molasses, hazelnuts, walnuts, coconut, and dates. 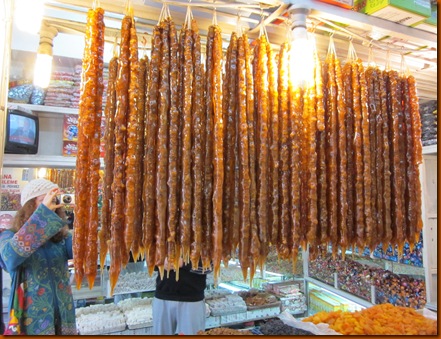 After the first şekerleme shop, I passed a man selling dates on the street. He offered me a taste and he mistook me for a Turk until I started stumbling a bit over my words. He complimented me on my Turkish, then warned me about some bad men, advising me that if anyone asked me to follow him alone somewhere I should refuse and stay far away. I thanked him and wondered if he thought I was dressed provocatively. “Çay içer misiniz?” he asked, but I politely turned him down.

In the second şekerleme shop, I chatted with the owner about his upcoming trip to Thailand. He asked me about the price of everything. I answered as best I could about cheap hotels and cheap food, but he kept saying that he had a lot of money because he had worked very hard and now wanted to really enjoy himself. Unfortunately for him, I couldn't give him a quote on the expensive hotels and restaurants. He also asked (I think out of curiosity only) the price of a prostitute. I had a nice chat with a few of the workers in the shop, got invited to lunch, to go out dancing on Saturday, and to stay at the home of the female shop worker and her sister. In Turkey, the line between hospitality and dating can be fuzzy for a female traveler, but that usually doesn't make the hospitality any less genuine and even the offers for dates are backed up with heartfelt kindness. 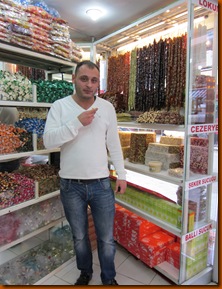 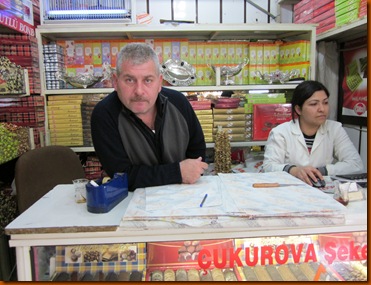 My last stop for the day before returning in the dolmuş was to a şalgam shop. Şalgam is a specialty of Adana and for many is quite an acquired taste. Before I describe what it is, let me say that if you like kombucha, you are likely more inclined to enjoy şalgam. Şalgam means turnip in Turkish, but the drink is more often made with pickled purple carrot juice (pickled alongside bulgur), to which some salt and spices have been added. You can find spicy and mild şalgam. I stopped at the şalgam shop to take some photos of this unique (and to my mind, delicious) drink and the beautiful jars of pickled turnips which accompanied it. The kind seller offered me a glass and I ordered it “acılı olsun” (spicy please) and as I drank it, we chatted and he asked what I was doing that night and requested I add him on Facebook. When I tried to pay, he refused. 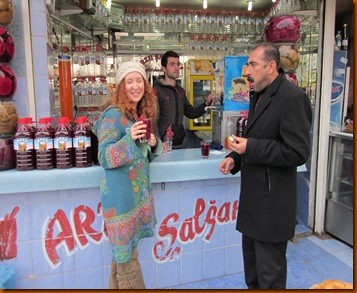 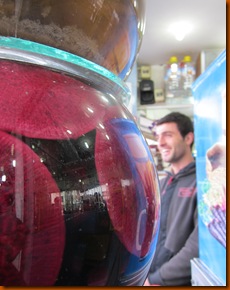 As I rode in the dolmuş, I felt bolstered by the day, by the number of personal connections I had made, by the warmth and hospitality I had been shown at every turn. The sweetest thing of all was that there was nothing peculiar, nothing unusual about the day. Just another day as a traveler in Turkey.

Posted by bliss vagabond at 1:24 AM