Languages, Perverts, Priests. Why I Hitchhike.

I didn't meet a single pervert while hitchhiking through Greece. I hitched about fifteen different cars in my time there and every single ride was a good one. Maybe this is a normal experience in other parts of the world, but in my time hitching in eastern Europe and Turkey, I have never experienced a good streak like this. At one point, the average percentage of perverts was as high as 25%. But what qualifies a driver as a pervert? Good question. There's quite a range, but any time the driver touches me suggestively, talks excessively of sex, asks me excessive questions about sex, or tries to solicit sex from me, I consider him a bad ride. Some of these drivers are pretty harmless though. They tend to throw the suggestion out there, when I (politely) refuse, they drop it or drop me off by the side of the road. It's the ones who are persistent and often the ones who deny any wrongdoing who are the real trouble. Ironically, it's often the drivers who tell me how dangerous hitchhiking is, who tell me I should take the bus or train instead who then end up proving their own points by making a move on me.

So with that background established, you can begin to imagine how truly delightful it was to autostop in Greece. I found that I had to wait a bit longer by the side of the roads; cars seemed less enthusiastic to pick me up, but those that did were always kind and respectful. And keep in mind that when I say I had to wait a bit longer to get picked up, I'm talking about 20 minutes instead of 10. Yes, being a solo female hitchhiker has certain advantages, but I'd trade them in an instant if it meant I didn't have to deal with perverts.

I had two favorite rides in Greece. The first taught me some Greek and the second was with a Greek Orthodox priest.

One thing I love about hitchiking is that it often really forces me to learn more of the local language, and learn it quickly. This is because I often don't get picked up by English speakers, especially in eastern Europe. So the morning I left for Greece, I did a bit of research and learned the six most useful words in any language, the words I need to get by and be polite: hello (yassas), thank you (efhari sto), yes (ne), no (ohi), goodbye (andio), and I'm sorry (signomi). But these would just be words on a piece of paper if I never got a chance to use them. Fortunately, my first driver spoke both Greek and Bulgarian, so I could still use my few words of Bulgarian while I was getting accustomed to using Greek. After a few rides, the Greek words started to come more naturally and I flatter myself that my accent improved as well.

While catching a ride from Kavala to Drama, my driver spoke a few words of English, but not enough to string together a long sentence. I was feeling comfortable with my new Greek words, so wanted to expand my vocabulary. He was more than happy to help and we soon established a pattern. I would say a word or phrase in English (nice to meet you) and he would provide the Greek (harika poli) which I practiced with his guidance and scribbled down in my little traveling notebook. I can't tell you how valuable it is to hear the accent as the words are spoken, but most valuable of all is the smile (positive reinforcement) I get from speaking even a little bit of the language. 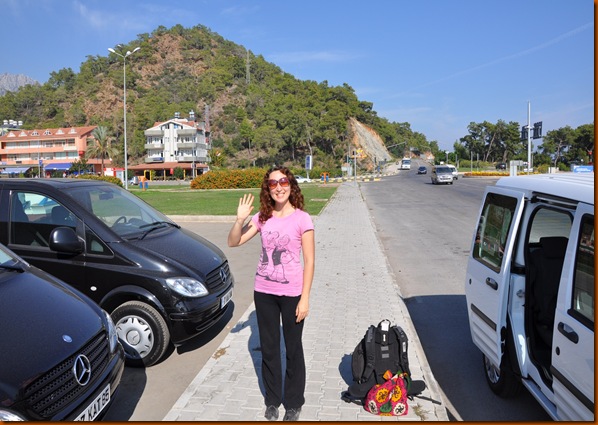 While hitching to Komotini, I stood and waited by a major highway. It was cold and windy, this being February, and I had been waiting for about fifteen minutes when an older, slightly beat up car pulled over and when I caught a glimpse of the driver, a bearded Greek Orthodox priest, I honestly didn't know what to expect. Getting hit on by a priest would be a little too much to handle, and frankly, just a little too cliché. I needn't have worried. He was the nicest man, if shocked by everything I said. I'm traveling alone. “Really? Strange...” I've been traveling for two years. “Really!? Bravo.” I'm unmarried. “Strange.” I believe in people, in kindness and hospitality. “Bravo!” But he, as with many of the people I meet, was concerned for my safety. He kept asking what would I do if a bad person tried to pick me up? What if no one pulled over to pick me up and it became dark? The only answers I could give him, that I trusted my instinct and that I didn't know and would deal with it if it happened, didn't seem to satisfy him much. So when he pulled off the highway at Xanthi and I still had a little ways to go until Komotini, he wanted to take me to the bus station and offered to pay for my ticket. I politely refused the offer, not the first of its kind and likely not the last. “I prefer autostop,” I told him. “I love to meet and talk with people. Imagine, if I didn't autostop I never would have met you.”

And that, in a nutshell, is why I continue to hitchhike, despite the perverts, despite the inconvenience, despite the cold, rain, wind. I live for the experience, for the stories, for the laughs and the exchange of language, culture, smiles.

Posted by bliss vagabond at 2:15 AM